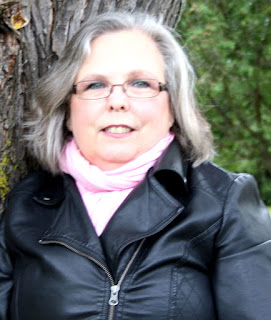 Melanie Robertson-King is thrilled to announce the upcoming release of the third book in her It Happened series featuring the Scott and Layne families, set in picturesque locations in Canada.

Beaches meets Born on the 4th of July

When Melissa Scott flees to the village of Percé, she’s determined to leave her painful memories behind her.

Gareth Young, a soldier with the Canadian Forces, never got over losing his friend in the war in Afghanistan. Nowadays, he’s happier in his own company than that of others, until she enters his life.

Despite her recent breakup and knowing rebound relationships don’t work, Melissa falls head over feet for the handsome military man, only to discover he comes with enough baggage to fill an army cargo plane.

Will the couple be able to work through their issues and achieve a happy ending together? 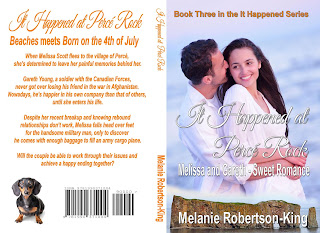 At the set of wooden stairs leading to the shoreline, Melissa picked up Buddy and descended. It was a short walk from here to the shoal, where she would cross. Once she reached the bottom, she put the dog back down, and the pair struck out.

Water lapped over the edges of the causeway and pooled in the lower sections of the sandbar. Melissa lifted her dachsie before stepping from the drier beach towards the mammoth chunk of shale and limestone. A lump formed in her throat as she stood gaping at its near-vertical cliff faces.

With Buddy tucked under her arm, she picked her way across. Unsure if it was due to the time of day, the time of year, or the bad weather forecast, there were not many people wandering around. No one strolled along Rue Mont Joli either. Strange.

Because he was well behaved and came when called, Melissa had no qualms about unclipping Buddy’s leash and putting him down. At first, he stayed by her side, sniffing the ground or raising his nose to catch a whiff of something. The scent of rotten eggs wafted through the air, no doubt brought on by rotting seaweed, occasionally overpowering the more pleasant aromas.

Melissa made herself comfortable on a boulder and pulled out her phone while Buddy amused himself. She had no new messages. Not hearing from Iain was a blessing. Maybe he realized they were finished.

She took pictures of the village from this vantage point and Buddy playing on the sand and pebbled shore. She was far too close to the rock to photograph it. She would have to wait for another time. The quay where the tour boats left from would be the best location. Melissa snapped a couple of selfies with Percé looming behind her — some smiling, some with pouty lips before returning the device to her back shorts pocket.

Loud barking and growling jolted her from her reverie as Buddy antagonized a company of gannets. Squawking seagulls soared overhead. One landed nearby and stared at Melissa with its beady yellow eyes. It took a few steps closer, ruffled its feathers and stepped back again. Living and working near the water in Saint John, she was used to seeing them. This one was different. It was more intimidating, almost like it was daring her to move so it could attack, like in the movie The Birds.

Water splashed by her feet. The tide was coming in. She wasn’t here that long, was she? Pulling her phone out, she checked the time. Yes, she had been. She had to act and fast or be cut off. “Come on, Bud, it’s time to go,” she called to her dachshund, but the animal continued harassing the waterfowl. She lunged for him, and he darted away closer to the arch — the most dangerous place of all here.

A clap of thunder rumbled in the distance. Things were quickly becoming dire. Melissa had to get her dog and return to the mainland before the thunderstorm hit. Too late. The skies blackened, and the rains pelted down. Lightning streaked across the sky, followed by yet another crash. How close was the storm? If she counted between the flash and the thunder, the longer the gap, the farther away the inclement weather was. There was more to the calculation, but at this point, it made no difference.

Strong winds pushed the incoming tide and created whitecaps. Huge waves churned and crashed over the sandbar cutting the two off from the shore ...

It Happened at Percé Rock is available to pre-order for the low price of 99¢/99p. You can get your copy here https://books2read.com/u/b6OJdp

After the June 6th launch date, the price will rise, so take advantage of the pre-order special!

Melanie Robertson-King has always been a fan of the written word. Growing up as an only child, her face was almost always buried in a book from the time she could read. Her father was one of the thousands of Home Children sent to Canada through the auspices of The Orphan Homes of Scotland, and she has been fortunate to be able to visit her father’s homeland many times and even met the Princess Royal (Princess Anne) at the orphanage where he was raised.

It Happened at Percé Rock is Melanie’s eleventh book.

You could win a mobi or epub version of It Happened at Percé Rock.

or use this link

Thanks for telling us about this novel. I'm going to read it.