I'm so excited to be part of Melanie Robertson-King's tour for her latest novel, IT HAPPENED IN GASTOWN. So, sit back, relax, and enjoy meeting the author and her characters. 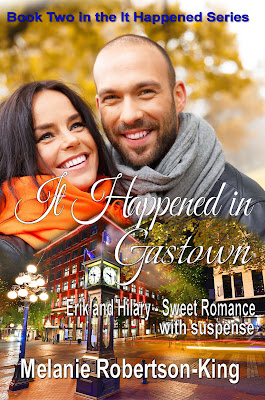 Hilary Dunbar is a uniformed constable with the Vancouver Police with an agenda to rid the streets of drugs, especially the bad ones the notorious dealer, Carlos Navarra, is trafficking.

Heroin addict, Erik Layne, has lived on the streets of Gastown for as long as he can remember, having left home and Toronto as a rebellious teenage addict. His and Hilary’s paths cross when she finds him unconscious in an alley after injecting a batch of the contaminated drug. He must fight for his life to keep from dying, not only from the tainted smack but also from the man who provided it.

A domestic disturbance call goes wrong, and Hilary suffers life-changing injuries as a result. As luck would have it, she and Erik are hospitalized in the same ward at Vancouver General Hospital. When she sinks into a deep depression, it’s he who pulls her out of her doldrums.

But will Hilary’s obsession with bringing down Navarra and others like him destroy their relationship and, more importantly, jeopardize their lives?

Out on routine patrol, Constables Hilary Dunbar and her partner Lukas Stephanopoulos drove north on Cambie Street towards the Gastown Steam Clock. As they passed the end of Blood Alley, she shouted, “Back up. Something’s down there.”


“Your imagination getting the better of you again?” He teased, but pulled over to the curb and slowly reversed until they blocked the mouth of the narrow passage.
Originally they called the lane Trounce Alley. Some maps still referred to the laneway as that. Others labelled the back street Blood Alley. Given the appearance, Hilary thought the latter more appropriate.
Window down, she trained the beam from the powerful spotlight mounted on the cruiser’s mirror into the alleyway. “See, beyond those dumpsters.”
“Likely just garbage.”
“Wait here; I’m going to take a closer look.”
Before exiting the car, she plucked a pair of nitrile gloves and the naloxone kit from the glove compartment. Once out, she shoved them in the pockets of her trousers. With the fingertips of her right hand brushing her gun holster and gripping the barrel of the torch in her left, she sidled towards the object.
Graffiti tags covered the walls of the buildings as well as the wooden hydro poles. The farther into the confined space she crept, the hairs on the nape of her neck bristled beneath the bun in which she styled her black hair. Whatever was down there wasn’t rubbish, as Luke said. The pong of stale urine made her eyes water.
Past the second dumpster, the body of a young man leaned against the wall. Dishevelled and filthy, his body odour was strong enough to make the foulest of skunk spray seem mild. At first glance, he appeared dead. His skin had a bluish tinge, and weeping sores dotted his face. Dark circles surrounded his eyes. Inching forward, Hilary squatted beside him.
A blood-filled syringe protruded from his left arm. Flashlight held under her chin; she donned the synthetic rubber gloves she brought with her and felt his neck for a pulse. The rhythmic throbbing beneath her fingertips, barely discernible.
The naloxone. The kit had been made available to officers who wanted the medication. Luke was against carrying the opioid blocker in the cruiser, but Hilary persuaded him. Now was the time to use it. She took the package out of her other trouser pocket, peeled the wrapper open and placed the nozzle in the victim’s left nostril and pressed the plunger.
She keyed the mic on her handset and started to speak. “Constable Dunbar.” As though on cue, the nearby Steam Clock began whistling — no sense in trying to outperform the contraption. Wait for the completion of its proclamation of the top of the hour — Westminster chimes followed by singular whistle blasts counting out the time. Soon relative quiet returned and Hilary tried again. “Constable Dunbar. Badge 8652. I need an ambulance at Blood Alley and Cambie Street. Suspected drug overdose. Have administered four milligrams of Narcan nasal spray. No response as of yet.”
By now, Luke had the cruiser’s roof lights on. Blue, red and white alternating then running from the driver’s side to the passenger’s side of the vehicle.
The wail of the siren grew louder. In minutes, paramedics jumped out and trundled a stretcher and medical equipment to the stricken person.
Hilary stood back, letting them do their jobs. “I gave him Narcan,” she said, handing the spent plastic bottle to one of them.
“He’s alive ... just. You found him in time. We’ve bagged the needle so they can run tests on the contents at the hospital. Figure out what he shot into his veins.” 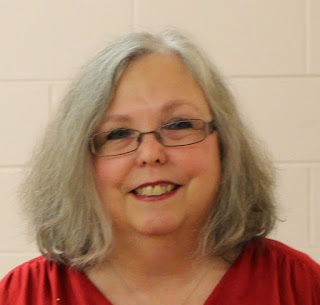 Everything you wanted to know about Melanie but were afraid to ask ...


A native of eastern Ontario, during her pre-school years, Melanie Robertson-King lived in a winterized cottage on the shore of the St Lawrence River. Before starting school, her family moved to Brockville, where she received her education, including a post-secondary degree in Computer Programming.
Growing up as an only child, Melanie was an avid reader and remains so to this day. She knew then one day she would be a writer. When she wasn’t talking about her dream of becoming an author, she wrote stories and began honing her skills at an early age.
Melanie’s father was a Scottish national. He came to Canada as a ‘Home Child’ through the auspices of The Orphan Homes of Scotland. She promised herself that one day, her feet would touch the soil in her father’s homeland. That first trip was in 1993, and she’s not looked back since, having returned to the auld country many more times and is looking forward to her next trip, possibly as soon as 2020. On one of her many trips to Scotland, Melanie had the honour of meeting Princess Anne (The Princess Royal) at the orphanage where her father was raised.
Encouraged to study Highland Dancing, she competed locally. Her final competition took place during the summer of 1969, a few short months after her father’s death, at the 1000 Islands Highland Games. In that last event, she won the Silver Medal in the Sword Dance.
Melanie began her professional writing career in non-fiction. One of her articles graced the cover of an international publication. At the same time, she continued to develop her writing voice: short stories (both fiction and non-fiction) as well as novel-length work.
Since her debut novel was published in the summer of 2012, Melanie has written seven more books (including two for children) and released the second edition of her first.
It Happened in Gastown is Melanie’s ninth book, and the second in the “It Happened” series of sweet romances set in picturesque locations across Canada.
Her short story, Cole’s Notes, has been re-edited and is available as a free read through her website and blog.
When not sequestered in her cave writing, plotting or editing, you’ll find her out and about. Favourite haunts (pardon the pun) are cemeteries (the older, the better) since they have more character, and perhaps a few more characters. She also loves travel and photography.
Melanie and fellow authors, Wendy H. Jones and Chris Longmuir, make up the infamous trio – the Princesses of Pandemonium.


Melanie is having a giveaway: an e copy (mobi, epub or pdf) of the first book in the series - It Happened on Dufferin Terrace. The draw will take place on Dec 1st. Everyone who comments on any of the blogs will have their name entered.

Sounds like a good deal to me. Happy Reading.