RUBY IN THE SKY 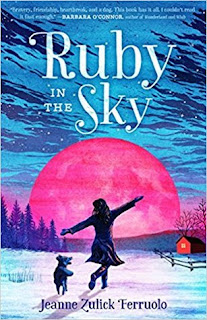 RUBY IN THE SKY

Sometimes, it seems as though everything goes wrong in a person’s life. Is it asking too much to want a true forever home? In Author Jeanne Zulick Ferruolo’s novel RUBY IN THE SKY, Ruby and her mother are moving to their forever home. Only it doesn’t work out the way they had planned. Ruby’s mother is arrested, and that’s only the beginning of events in Ruby’s life. As she befriends an old lady and a boy in school, she learns that people are not always what they seem.

RUBY IN THE SKY is a story of family and friendship, forgiveness and bravery, along with a touch of magic and the realization that everyone has his or her own story. I also learned something about the real “Ruby Moon", which is very rare, sort of like Ruby Moon Hayes in the story. Do you know what it is?

This novel is ideal for school libraries, as well as your own private library. Jeanne Zulick Ferruolo has written a story that will make you smile. It will also bring tears to your eyes, at least it did to mine. I also  want to learn more about this girl. Happy Reading!

Available at AMAZON     BARNES AND NOBLE and other places

Have a good week!