At last! The novel I've been waiting for forever it seems is scheduled for an October 2 release. Yay! I'm so happy to have an ARC and to share my thoughts about this exciting story. Sit  back, relax, and meet a very interesting family. 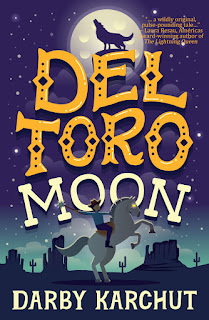 This cover is exactly right for the story. Beautiful!

“Ride hard, swing hard, and take out as many of those creepy critters as you can.”
Twelve year old Matt Del Toro is the greenest greenhorn in his family’s centuries-old business: riding down and destroying wolf-like monsters, known as skinners. Now, with those creatures multiplying, both in number and ferocity, Matt must saddle up and match his father’s skills at monster whacking. Odds of doing that? Yeah, about a trillion to one. Because Matt’s father is the legendary Javier Del Toro—hunter, scholar, and a true caballero: a gentleman of the horse.
Luckily, Matt has twelve hundred pounds of backup in his best friend—El Cid, an Andalusian war stallion with the ability of human speech, more fighting savvy than a medieval knight, and a heart as big and steadfast as the Rocky Mountains.
Serious horse power.
Those skinners don’t stand a chance.

What do you do when you read a book that you don’t want to end, but it does, of course? I’ll tell you what I just did. I was enjoying the story so much, I was not ready to let go of it. So, I did the logical thing and read it again. I’m happy, happy I did because I grew even closer to the characters and their lives and the way each of them faced a situation in his or her own way. What am I talking about? Multi-award-winning author Darby Karchut’s latest novel, DEL TORO MOON, a story that took me on an adventure I shall always remember.

As I followed the Del Toro family through their good times and bad, I laughed, I cried, and I fell in love. The author has a magic touch when it comes to creating characters so real I can imagine them as my neighbors. The Del Toro family would make for an exciting neighborhood for sure.

Twelve-year-old Matt is my favorite character. Javier, his father, is doing a good job of raising Matt and his older brother, Ben, after their mother’s death in a car accident, years earlier. They have disagreements as in most families, but they are solved. Their father knows how to deal with his sons. Matt also has a lot of questions about life and girls, which he will learn a little at a time. But one thing he knows is horses.

Here again, Darby Karchut shows her knowledge of an animal that fascinates me. I know a little about horses: quarter horses and thoroughbreds. In DEL TORO MOON, I met a breed of Andalusian War Horses. Wow! The description of them makes me want to see a live one. There’s El Cid and Turk and Izzie, who all play important roles in the novel and in some ways are the stars. At least to me. They also have a special talent, but I’m not telling what. Surprise.

I must not forget the creatures known as skinners. They mean death to whomever they bite. If you have a weak stomach maybe don’t read about them while you’re eating. The author describes them very vividly, and it’s not a pretty picture. I hope to never meet such a creature.

Thank you, Darby Karchut, for taking me on this wild adventure. Does Matt have any more plans for the future? Hint, hint. I highly recommend this story.