Monday! Did everyone remember the time change? We're starting this week off with a new book that I think you'll enjoy. Even though it's for middle-grade readers, older folks should like it, as well. I do. So, may I introduce you to CORNERS by Corrina Austin 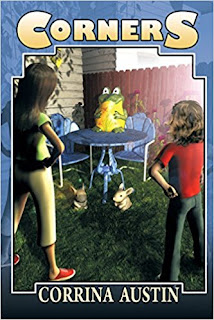 The cover attracts your attention, doesn't it?

Here are my thoughts.

Ah, the ‘60s, the Roadrunner and Coyote, Elvis, the Beatles, Connie Frances, polio. If you’re too young to remember those exciting years then cheer up. You can travel back to 1969, along with spending time in the present, in the middle-grade novel CORNERS by Author Corinna Austin.


Told in alternating chapters by the young Davy and the grown David, we meet ten-year-old Davy in 1969. Davy’s life is not easy. He’s different from the other kids. For one thing, he has no friends. Also, in the ‘60s most families had a mother and a father; Davy never met his father. There’s still another thing that makes him different: he can’t swim in the deep water. All he does is sink and nearly drown.


The day thirteen-year-old Ellis, who is spending the summer with her grandmother, saves his life changes everything. She becomes not only his first friend, but his baby sitter while his mother is at work. They also make “corners,” which adds a beautiful touch to the story. I don’t want to give anything away so I won’t explain about “corners.” But I do believe that one day I’d like to make a “corner” of my own. You may want to as well, after reading the book.


Corrina Austin also shows us Davy’s story from the point-of-view of the grown-up Davy (David). In those chapters David is talking to his youngest son, Will, telling him about his early life. I love the relationship between father and son. Their conversation sounds so real it places the reader in the scene with the characters. And the ending is just right, kind of what I expected, or at least hoped for.


CORNERS would be a great addition to school classrooms and libraries, and also would be good for a study of the 1960's in history. Recommended.

And other places where books are sold.