Today, I have the pleasure of hosting the fabulous author L A Dragoni, who has exciting news for us. So, let's take a look at what she's been up to. 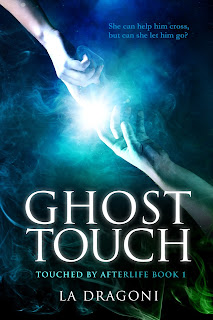 Oh, yes! A mysterious cover. And the hands. Whose are they? What do they mean? Perfect!
Blurb:
﻿
For fifteen minutes each night a portal opens in Tamara’s barn and a horde of ghosts spills into her yard. She and Dex work together to find a way to help Cal and the thousands of spirits stuck in the void to cross over. When she learns she has the ghost touch—the ability to touch the ghosts as if they were corporeal—and she accidentally helps a little boy cross, she believes it might be possible. But not all the spirits play nice and when they learn they can sip energy from her ghost touch, they become greedy putting her life at risk.
Each time Cal has to pull her from the mass of ghosts, her touch restores him more and more until he is at danger of being stuck on earth—forever, which is very enticing to Tamara the better she knows him. Will she and Dex figure out how to help the spirits cross and if they do, will she be able to let Cal go?
Available in ebook, and audiobook from Amazon, and now available in print!
Also available on Barnes and Noble, Kobo, iTunes, and other e-tailers.
Excerpt:
The newest face in Tamara’s latest nightmare was about to be revealed when a loud SLAM woke her. Still anxious from the events of the night before, Tamara had slept lightly all night. She pulled the shotgun from where she’d tucked it under her bed, slipped into a pair of sneakers and headed out to the barn. The hairs on the back of her neck rose when she found Ruff cowering and whimpering in front of the doors where he’d sat menacingly the night before. She hesitated as she drew up next to him. A faint blue light seeped through the crack between the large doors. There were no windows on the front of the building, so there was no way she could know who was in there or where they were. Even though it would be embarrassing, she decided to call the police again.
As she turned toward the house, the large barn doors swung open. Her heart kicked into high gear. She leveled the shotgun, pointing it straight at the doors as they glided open on their own accord, hoping the sight of the gun would be enough to scare the intruder away.
An unnatural blue-white light spilled outward, making her squint. Blinding bright in the center, it faded to murky shadows in the corners. Tamara’s heart all but stopped when shapes developed within the bright center. A crowd of people surged forward, scattering in all directions across her yard.
There were so many. Panic filled Tamara while she tried to figure out what to do, how to defend herself against so many. Who were all these people? Why had they been in her barn? Why is that man digging?
“Hey, stop!” she yelled.
A woman in a torn red dress stumbled up the hill reminding Tamara of herself in last night’s dream. The woman’s long blond hair streamed behind her in the windless night. She continually glanced over her shoulder, a terrified expression gnarling her beautiful face, though no one pursued her.
Then a single man sauntered forward, his attention intent on Tamara. The bright light behind him made it impossible for her to make out any detail, but his manner seemed equal parts commanding and relaxed. Her heart fluttered madly, and she felt the muzzle of the rifle dip toward the ground as she considered fleeing. A flat, wide-brimmed cowboy hat sat straight on his head. Well-worn leather chaps covered his bowed legs. Strange clicking noises accompanied him across the lawn. As he drew closer his image sharpened. When Tamara saw his face, she lowered the gun barrel. “Sheesh, I am dreaming.”
She looked into the skinless face of her latest nightmare.
“Ma’am, I can assure you, this is no dream.”
Reviews:
LA Dragoni weaves several interesting and unique premises about the afterlife into this story -- and the love triangle is only two parts living! The story has eerie, vivid descriptions of the ghosts, and the emotional turmoil of all three of the main characters is very well defined. Dragoni provides an awesome villain to hate and then masterfully manages to change the reader's opinion of the villain.
There are several twists and surprises in the plot, and the ending is satisfying but absolutely leaves questions that hopefully will be answered in a subsequent novel.
-Hall Ways blog 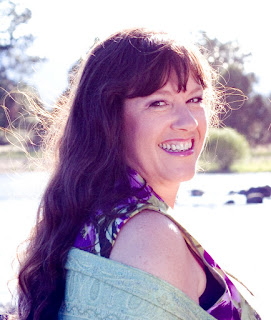 About the author: LA Dragoni isn’t too particular about who falls in love or where they fall in love. She simply considers it her job to capture the story about their love. Whether it’s paranormal, mythical, or time travel, LA will be there to divine their story for you. She lives in Central Oregon with her husband and children, but haunts ghost towns and cemeteries up and down the west, in search of the next adventure to sift through her storytelling brain. Learn more about LA and her work at ladragoni.com

Ghost stories are some of my favorites and GHOST TOUCH is a good one. You can read my review at Amazon.
Congratulations  LA
Happy Reading!
﻿
Posted by Beverly Stowe McClure at 5:00 AM