Welcome Wednesday.  I receive e-mails from several different publishers and they often offer ARCs of forthcoming books. I try to ignore them, but sometimes I can't. That's how I received an ARC of CITY OF SAINTS & THIEVES by Natalie C. Anderson.  Publication date January 24, 2017. Here are my thoughts. 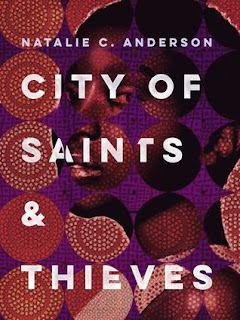 CITY OF SAINTS & THIEVES arc review
By Natalie C. Anderson
Refugee: a person who has been forced to leave their country in order to escape war, persecution, or natural disasters. The world today, as in the past, is filled with refugees, searching for a home, a place of safety for their families. Some find happiness, but sadly, others do not.
CITY OF SAINTS & THIEVES, by Author Natalie C. Anderson, is the story of sixteen-year-old Tina , a refugee from the Congo. Her mother is dead, murdered by Mr. Grayhill, her employer, or so Tina believes. Her younger sister, Kiki, is on scholarship at a boarding school, and Tina is a member of the Goondas, the gang in Sangui City. Not exactly the new life her mother had wanted for her children. Tina’s goal in life is to watch the wealthy Mr. Grayhill’s world crumble around him. Then she’ll kill him, the way he did her mother. But life is complicated, and Tina soon learns the truth about Mr. Grayhill’s family, as well as about her own.
Natalie C. Anderson has created characters that seem human. They’re not perfect. They have their faults, as well as their good points. Tina is tough. She has to be to survive. She’ll also do most anything to get her revenge. When it comes to her younger sister, though, she’s loving and caring and gentle. Her emotions about Michael, Mr. Grayhill’s son and her friend, are even more complicated.
Tina’s search for the truth, the choices she makes, and what she discovers about her family make for a fascinating read. CITY OF SAINTS & THIEVES is filled with action, violence, tender moments, and a girl’s coming of age. This novel would make a great addition for middle school classrooms and libraries, as well as public libraries and your own. Recommended.
AMAZON    BARNES 7 NOBLE    AUDIBLE
Happy Reading!
Posted by Beverly Stowe McClure at 5:00 AM