Halloween is next Monday, but parties and trick-or-treating are already going on. Many churches are having Trunk or Treats. A lot of businesses and organizations have plans for the children. When I was a kid, back in the "olden" days, we went from door-to-door for treats. Some people ignored us, so we sprinkled confetti on their porches. I know ... naughty girls.

We also had a lot of parties when I was older. We bobbed for apples and went on scavenger hunts. I wasn't a reader in the kid and teen years, so I don't have any favorite Halloween stories from those times. I do now. THE LEGEND OF SLEEPY HOLLOW by Washington Irving. Cover from Good Reads
IT'S THE GREAT PUMPKIN, CHARLIE BROWN is my favorite Halloween TV show. 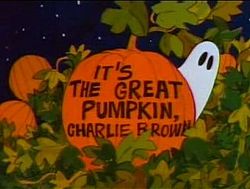 Image from Wikipedia - Title Card from 1966 TV Special
Created by Charles M. Schultz
What's you favorite ghost story and/or TV show?
﻿I've written two ghost stories. The latest, A PIRATE, A BLOCKADE RUNNER, AND A CAT, is for MG and tween readers. It would make a nice stocking stuffer for the young readers in the family.
Short Excerpt:
When something brushed against my bare leg, already creeped out, I jumped. "Yeow!" A cat, gray as the shadows, a green mist surrounding it, tilted its head and grinned at me. Yup. It grinned, a vicious I-know-you-hate-cats-and-I-will-torture-you-for-being-you grin.
James scooped up the cat. "Dixie was on the ship with me. She wants to know what happened to her kittens left on board while she and I went ashore."
"The cat's a ghost, too?" I asked.
"She is," Star said.
I almost choked on my own spit. I had entered the wildest nightmare in the universe.. First, a ghost blockade runner. Second, a ghost cat. And me, the guy who knew ghosts did not exist. Notice, I used the past tense knew.""What next?" I shouldn't have asked. 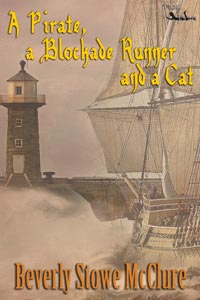 ﻿
AMAZON
﻿
MUSEITUP PUBLISHING
Then there's LISTEN TO THE GHOST, which won't be for sale for much longer. Watch for 2017 though. I may try something new.
Blurb:
All seventeen-year-old Jade Dalton wants to do is show her paintings at Charleston, South Carolina's, annual Piccolo Spoleto Festival, swim in the ocean, forget Kurt Sinclair, her ex-boyfriend and his lying lips, and prove she's as perfect as her brother, David. So how does she end up with Phoebe, a ghost who doesn't want to be a ghost; Doc, a one-hundred-year-old neighbor who talks in riddles; and Matt, a gorgeous saxophone player who changes her opinion about guys?
Jade and Matt are soon caught up in a desperate search for two wedding bands that will set Phoebe free. They must find the rings by Jade's eighteenth birthday, the same day that Phoebe was to marry her fiancé, Isaac, in 1923, or she is doomed to remain a ghost for eternity. 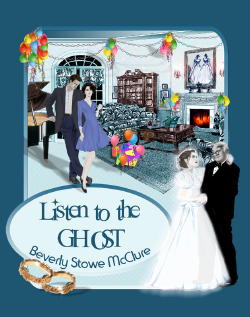 This cover will soon be gone.
Happy Reading!
﻿
﻿
Posted by Beverly Stowe McClure at 5:00 AM