Quote for the week: Success is getting what you want. Happiness is wanting what you get. Dale Carnegie
A new week begins. Where did the weekend go? I had so many things planned to do; they're still waiting. Oh, well, I'll do them next weekend, or not.

Today we're at Books, Dreams, Life
Don't forget the $10.00 giveaway at the end of the tour.
I also have a book review. So relax and enjoy. I think this story will be an inspiration for you. 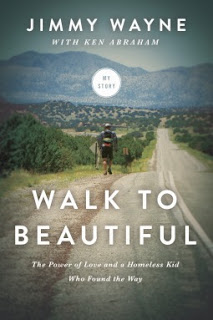 Blurb from Good Reads and the back of the book:
Imagine being thirteen, in a strange city, hundreds of miles away from home, and your mom abandons you at a bus station, driving off into the night with her lover.

It's a miracle Jimmy Wayne survived his growing-up years. Hungry, homeless, and bouncing in and out of the foster care system, Jimmy spent more nights wandering and sleeping in the streets than he cares to remember. His father left before he was born. And his mama, when she wasn't in a mental hospital or behind bars for various small offenses, was simply too overwhelmed, trying to survive herself.

There's more on Good Reads, but I'll stop there and leave you my thoughts.

From the beginning of the story, where the reader meets Jimmy Wayne and his childhood friend Rob Daniels, playing at Madison Square Garden as part of Brad Paisley’s American Saturday Night Tour, this novel is an inspiration. We, at least I, seldom think about stars’ journeys to fame. It’s easy, right? They can sing, or act, or whatever they do, and soon they’re famous.

Let me tell you, after reading Jimmy Wayne’s story I’ll think twice from now on about who they really are and the struggles many of them went through just to survive to adulthood. His home life was one of the worst I’ve ever read about, yet he survived and even became a star. How did a boy, a child, do this? Jimmy Wayne credits an elderly couple that took him in and helped him get an education for changing his life.

His story made me think of my mother and aunt, who also were foster children. What would their lives have been like had an elderly couple not given them a home and education? It might have turned out quite different than it did.

But Jimmy Wayne, a survivor, decided to do something to help other children in the same situation. In 2010, with God’s help and the belief others had in him, he walked 1,700 miles from Nashville to Phoenix, in his Meet Me Halfway campaign to raise awareness for foster kids. His experience in doing this is a story itself.

I recommend this book for everyone, to see how one person can make a difference in the lives of others. I think it will touch your heart the way it has mine. Jimmy trusted in God’s love for him to see him through.