Quote of the week: Blessed is the influence of one true, loving human soul on another. George Eliot

Today, I'm so happy to tell you about Award-winning Author Darby Karchut's forthcoming book, due out in September. I'm sort of sad too because it's the final book in the Finn MacCullen series.


Just look at this cover. Isn't it gorgeous? 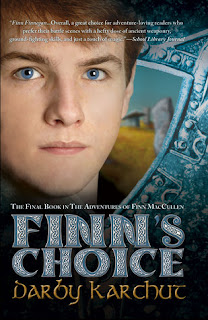 Finn looks so serious. Making choices is sometimes tough.
Blurb from Good Reads:
Just when Finn MacCullen thought fate couldn’t kick him any harder after the events of the Festival of the Hunt, it does. Now, he must overcome a series of nearly impossible trials to prove his worth as an apprentice, or lose his place at his master Gideon’s side.

But Finn and Gideon, and their friends, are determined to boot fate right back. They’re going to do whatever it takes to succeed, including teaming up with a sorceress and a certain teen angel.

However, Finn’s life has as many twists as a Celtic knot, and master and apprentice find themselves in their ancestral homeland of Ireland with only their wits—and a fair bit of the Black Hand’s charm—to protect them from the vengeful Celtic goddess known as the Scáthach.

In this heart-stopping finale of the award-winning series, it’s going to take every scrap of Finn’s Irish luck and pluck to save himself, and his master, from death. Or worse.
###
My Review
FINN’S CHOICE


By Darby Karchut
Tell me this isn’t the end. What will I do without Finn and Gideon, the boys that have taught me so much about bravery, friendship, family, and love? I’ve held my breath as they faced danger and even death from the Amandan, yucky creatures that are their enemies. For three years I‘ve followed apprentice Finnegan MacCullen and his mentor Gideon Lir, Knight of the Tuatha De Danaan, through their journey to make Finn a knight. They worked together, fought together, laughed together, and cried together.


In FINN’S CHOICE, THE FINAL BOOK IN THE ADVENTURES OF FINN MACCULLEN, by Award-winning Author Darby Karchut, a goddess threatens to separate apprentice and mentor. Gideon makes Finn a promise, however. But will he be able to keep it?


This novel is a lovely wrap up to the series. Even though he’s half human and half Fey, Finn’s pretty much like most boys of thirteen. He’s a bit “cheeky” (Gideon’s words.) He’s also a loyal friend and would give his life to save others. And girls confuse him. I love the relationship between Finn and Gideon. It’s more than mentor and apprentice; it’s like father and son. They have their disagreements, sure, but still honor and respect each other.

The author writes such realistic scenes that they pull the reader into the story so deeply the reader becomes a part of the action, or conversation, along with the characters.
The novel also contains a pleasant surprise. Griffin, a Terrae Angeli from The Griffin Series, plays an important role in the story. Meeting Griffin and his mentor Basil, again, brought back old memories of their story. So you know what I’ll be doing this summer? Rereading the Griffin series, along with the Finn MacCullen books. What a way to spent hot summer evenings. If you haven’t read them, you ought to.


Once again, Darby Karchut has created a story that’s magical, real-life, and also shows the importance of making the right choice to reach a goal. I recommend FINN’S CHOICE for mg readers and also for older readers who enjoy a great novel. FINN’S CHOICE would make a wonderful addition to school libraries and classrooms, as well as your own library. Perhaps this isn't the end, after all.
Preorder at AMAZON and Barnes & Noble

Darby Karchut is an award-winning author, dreamer, and compulsive dawn greeter. A native of New Mexico, she now lives in the foothills of the Rocky Mountains, where she runs in blizzards and bikes in lightning storms. When not dodging death by Colorado, Darby is busy writing for children, teens, and adults. She is represented by Amanda Rutter at Red Sofa Literary.

Her YA series, GRIFFIN RISING, has been optioned for film.

Her Middle Grade books from Spencer Hill Press include FINN FINNEGAN (2013), GIDEON'S SPEAR (2014), and THE HOUND AT THE GATE (January 2015). The final book in the series, FINN'S CHOICE, will release September 2016.


A gentle reminder. The drawing for the deck of playing cards ends soon. It's not too late to enter. 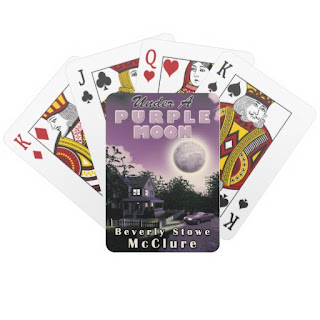