REVIEWS OF ISOSCELES AND MOONLESS

What's happening today? I've been reading. Shh, don't look at the carpet that needs vacuuming, the floors that need mopping, and all those other boring chores. Sometimes a girl's got to do what a girl's got to do. I know, I know. Bad grammar. Anyhow, in between edits and new stories I'm visiting other worlds, other people, and learning their stories. I'm a slow reader, but that's okay. I'd like to share my thoughts on a couple of novels I recently finished. More to come. So, take a break and relax.

Children and teens usually have best friends. Best friends sometimes change with the passing years. Sometimes they stay the same. Either way, best friends are seldom forgotten. So what does a young person do when his or her best friend dies, too young, too young?

Author Scott R. Caseley deals with such a situation in his recent YA coming-of-age-mystery ISOCELES. The book starts with the death of Trey Goodsby, Sean McIntyre’s best friend. He died in the bathtub, taking his own life. The story then flashes back thirteen years to give the reader the background on the two boys and Madeline Edwards, the girl Sean likes but who likes Trey. From the first day of first grade and through the years that follow, Sean stays in trouble. The situation with Sean’s parents and Trey’s family complicates matters.

Scott R. Caseley has written a story about family, friendship, love, and death. As we follow the three characters in their daily struggles, we see how each of them deals with the issues they face, not always in the best way, but remember, they’re children and teens.

ISOCELES would be a good novel for teens to read to see that they are not alone when they face seemingly impossible situations. A good novel that will make everyone who reads it want happiness and success for the young characters, at least it did me.

Have you ever had nightmares that terrified you? Have you ever looked in a mirror and thought the reflection you saw was someone else because you’re not beautiful like the image staring back at you? In Author Crystal Collier’s fantasy novel MOONLESS (MAIDEN OF TIME BOOK 1) we meet sixteen-year-old Alexia Dumont, who has nightmares. For Alexia, they started when she turned sixteen, and, unlike the dreams most of us have that go away when we wake up, Alexia’s dreams come true.

The author has written a story about family, secrets, love, and danger. She has created a fantasy world with characters known as the “Passionate” and the “Soulless” to name a few. As Alexia, little by little, discovers the truth about her mother and father, as well as about Arik, the man she loves, she’s faced with choices that will determine not only her future but the lives of others as well.

I really like Alexia. She’s brave and bold at times. She’s also human, well sort of, enough to make mistakes. If you enjoy characters that keep you guessing what they’ll do next and a story with a touch of mystery and a little romance, then pick up a copy of MOONLESS (MAIDEN OF TIME BOOK 1). See if you can solve all the mysteries before the end. Things did not always turn out the way I expected them to. How about you? 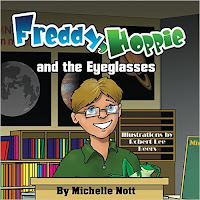 What does the world look like to you? Do you see everything clearly? The veins in the leaf of a tree? The bee on the flower? The words in a book? And other things you look at? If so, wonderful. Some people, children and adults, have trouble, however. When they try to read, the words are a blur. They might see the leaf or the flower, but not little details.

In the picture book FREDDY, HOPPIE AND THE EYEGLASSES, by Author Michelle Nott, Freddy has a problem. He’s getting ready to go to school, but when he looks at his wristwatch the numbers are smudged and he thinks the watch is broken. His day goes from bad to worse, and he can’t answer his teacher’s questions because he can’t see the words in the book he’s reading.

His pet frog, Hoppie, comes to Freddy’s rescue, or rather she tries to. Freddy doesn’t know what’s wrong. Neither does Hoppie. What can Freddy do? FREDDY, HOPPIE AND THE EYEGLASSES is a story that many young people might relate to. Sometimes they don’t know they need glasses. Freddy’s story might help explain their blurry vision.

Robert Lee Beers’ illustrations are just right. The expression on Freddy’s face shows his confusion in the different scenes, and I really like Hoppie. Who wouldn’t want a frog that rides in the boy’s pocket and tries to help him solve his problems? This would make a nice addition to school libraries and public libraries, as well as your own private library.