A REVIEW AND A GIVEAWAY

Quote for the week:  Wherever you go, no matter the weather, always bring your own sunshine.
Anthony J. D' Angelo

Just a couple of short notes today. Thursday, our library had a book signing for local authors. Three of us showed up. We had fun. Here's the proof. 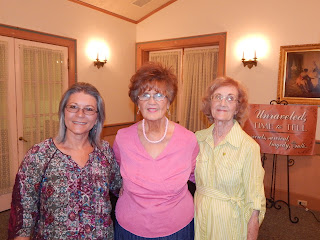 Look at those smiling faces.
More good news. The Children's Literary Classics has awarded Under a Purple Moon with the CLC Seal of Approval and a nice review.
﻿
Review from CLC


Eden has spent her entire life feeling as though she's not good enough.  Her mother, who insists Eden refer to her by her given name, is critical of everything she does.  Her father tries, but he seems to be more concerned with his hobbies than with his daughter's well-being.  But what she hates most is the fighting, especially because it's usually her they're quarreling about.

Eden finds solitude in an old abandoned home.  She goes there to get away from the criticism and the feuding.  But what she ultimately finds there is an unlikely group of friends, a motley crew of teens who are also escaping their own struggles at home, who give her the acceptance and encouragement she so desperately needs.  Under a Purple Moon is a book about friendship, and in particular, about one young girl who comes to accept her own self-worth.  Author Beverly Stowe McClure has done a splendid job depicting the wide and varied range of emotions experienced by Eden and her friends.  Under a Purple Moon is a book which young readers will find to be very relatable.
###
Also, don't forget the giveaway on Good Reads for A Family for Leona. Time is running out. Have a great week. See the entry form at top of page. I tried to add it below, but did something wrong, as usual and it doesn't work out. I'll never learn all this technical stuff.
Happy Reading
﻿
Posted by Beverly Stowe McClure at 5:00 AM