Quote for the week: In the end, it's not the years in your life that count, it's the life in your years. Abraham Lincoln

Today, I'm excited to host Author Stephanie Faris in the cover reveal for her forthcoming children's book PIPER MORGAN TO THE RESCUE. 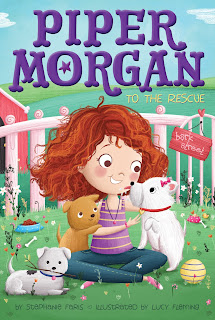 Now who can resist this adorable cover? Just look at the way these fur babies are looking at Piper. So, so cute.
Blurb:


Piper helps some four-legged friends find the perfect home in the third book of the brand-new Piper Morgan series.

Piper is super excited to help out at Bark Street, a local animal shelter in town. Who wouldn’t want to be surrounded by adorable puppies and dogs all day? And when Piper sees Taffy, the cutest dog she has ever seen, Piper is determined to find a way to bring Taffy home. But it won’t be easy—especially when she finds out someone else wants to make Taffy a part of their family, too!

Stephanie would like to share some facts about the challenge of writing chapter books for young readers.

The Chapter Book Difference
by Stephanie Faris
I’ve now written books with characters between the ages of eight and 35, starting at the upper end of that range and working my way downward. I have to say, after all of those books, the younger the character, the more fun it is to write. How many of us can remember what it was like to be a child, when your biggest problem was whether or not your parents were being fair?


Chapter books are especially challenging, since you have to stop and think before every sentence. Even the sentence I just wrote would be far too complex. An eight-year-old not only sees the world differently, she expresses her thoughts and feelings in a much simpler manner. I think writing for tweens helped with the transition, since twelve-year-olds also look at the world through their own limited frame of reference.

If someone asked me which I preferred, chapter or middle grade, I’d say both are equal. In fact, going back and forth between the two extremes keeps things fresh. I love living in Piper’s head for a while, then switching over to the twelve-year-old star of my current middle grade book. If I have trouble getting back into the voice, I just read a few books in that age group and the words start flowing.

Whatever the age of your main characters, at one time they were eight. They struggled to make friends and avoid getting in trouble at school and home. They learned and grew and eventually became the characters they are in your books today. It might be a fun exercise to imagine what your characters were like at eight years old. Were they feisty and fun like Piper or studious like Harriet in Harriet the Spy? You might understand your characters a little better after imagining them that way.
### 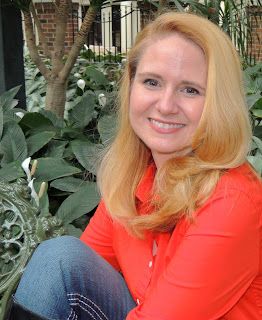 Stephanie Faris knew she wanted to be an author from a very young age. In fact, her mother often told her to stop reading so much and go outside and play with the other kids. After graduating from Middle Tennessee State University with a Bachelor of Science in broadcast journalism, she somehow found herself working in information technology. But she never stopped writing.


Stephanie is the Simon & Schuster author of 30 Days of No Gossip and 25 Roses, as well as the upcoming Piper Morgan series. When she isn’t crafting fiction, she writes for a variety of online websites on the topics of business, technology, and her favorite subject of all—fashion. She lives in Nashville with her husband, a sales executive.

Thank you for visiting with us today, Stephanie. Congratulations on your latest book.