Please join me today to celebrate with Author Elodie Nowodazkij her latest story, A SUMMER LIKE NO OTHER. 
She’s his best friend’s little sister. He’s the biggest player of them all.


They shouldn’t be together. But this summer’s just too tempting.


Sixteen-year-old Emilia Moretti’s goal for the summer is simple: forget her brother’s best friend—Nick Grawsky—ever existed. It should be easy: He’s spending his summer in the Hamptons, adding girls in tiny bikinis to his list of broken hearts. Guarantee he won’t be telling them they’re like his little sisters. This summer, Emilia won’t stay awake at night thinking about him. She’ll need flawless ballet movements to have a shot at next year’s showcase, and she’s finally ready to search for her birth parents. But when Nick decides to stay in the city, Emilia’s resolve disappears in a pirouette. Maybe it’s the spin they needed to be together. As long as she doesn’t get stuck believing in happily ever after…


Nick is tired of pretending to be the happy, let’s-have-fun guy. His father wants him to change his career from professional dancer to…lawyer. He needs to put all of his focus on dancing to prove to Daddy Dearest he’s good enough to make it big. And he may have a case of the bluest balls in history courtesy of Emilia. She’s off-limits: The bro code with Roberto even forbids the dirty thoughts he has about her. Besides, he’s not boyfriend material. He only has time for flings, for girls who don’t expect much, for girls he doesn’t want to kiss goodnight. He knows he should resist her, but he’s not sure he wants to…


At least for this summer.


It’s going to be a summer like no other. 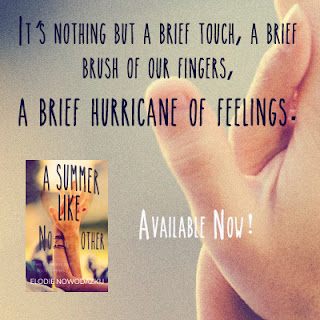 
1.      Elodie’s sister’s name is Emilie. This may or may not have influenced the name of the main character to Emilia J

2.      The sentence, “It’s nothing but a brief touch, a brief brush of our fingers, a brief hurricane of feelings.” was written in cooperation with her husband. She asked him for a word, he said “storm,” she changed it to “hurricane”.

3.      Elodie designed the cover of A Summer Like No Other.

4.      A Summer Like No Other almost never saw the light of the day, it was only supposed to be a few notes to help Elodie draft Always Second Best, but the characters wanted their summer to be told.

5.      A lot of kissing was added during the revision stage. 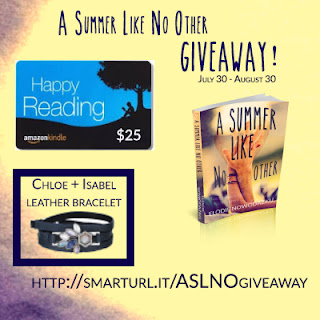 To celebrate the release of A Summer Like No Other, I have set up a giveaway with pretty special prizes
(including a leather bracelet from Chloe + Isabel)
You have mannnnny ways to enter and you have an entire month to do so!
Link to participate: http://smarturl.it/ASLNOgiveaway  Open internationally.
Thank you SO MUCH!!!
Other books by the author:
·         One, Two, Three – available now (Amazon – B&N – iTunes – Kobo)
·         One Dream Only – Free! (Amazon – B&N – iTunes – Kobo)
·         Always Second Best – Available for pre-order (Amazon) 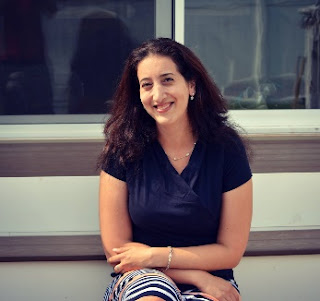 Elodie Nowodazkij was raised in a tiny village in France, where she could always be found a book in hand. At nineteen, she moved to the US, where she learned she’d never lose her French accent. She graduated with a bachelor’s degree in Modern Language & Linguistics, and later earned master’s degrees in German Cultural Studies and European Studies. Unbeknownst to her professors, she sometimes drafted stories in class. Now she lives in Maryland with her husband, their dog and their cat. She's also a serial smiley user.
Connect with the author
Facebook reader group (chat with the author, early excerpts, ARCs opportunities, giveaways…) – https://www.facebook.com/groups/954159761294820/
Newsletter (Exclusive bonus scenes, regular updates, videos, giveaways…) – http://elodienowodazkij.us3.list-manage.com/subscribe?u=4fe2ebb3f95df52e0954e0044&id=f404024751
Twitter - https://twitter.com/ENowodazkij
Instagram - https://instagram.com/enowodazkij/
Congratulations, Elodie!
Happy Reading!﻿
Posted by Beverly Stowe McClure at 5:00 AM

Email ThisBlogThis!Share to TwitterShare to FacebookShare to Pinterest
Labels: A Summer Like No Other, Elodie Nowodazkij, giveaway, novella