Ashelyn Drake has a new book due out soon.

Congratulations, Ashelyn!
That's a good question. Will have to think about it.
###
I also have a fun review to share with you today.
Meet a SEVENTH GRADE ALIEN HERO! 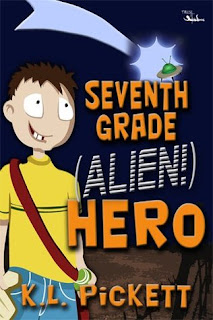 SEVENTH GRADE ALIEN HERO Review
By K. L. Pickett
Have you ever dreamed of being famous? Would you like to do something spectacular that will get you in the newspapers and on TV? Maybe you’ve been successful and accomplished your dreams. Or maybe you became famous in a different way than you imagined.
In Author K. L. Pickett’s MG science fiction novel, we meet Dustin Cotter as he and his mother adjust to a new home in a new state after his parents’ divorce. A move to a strange town, where you don’t know anyone at school, is tough on a seventh-grade boy, or any boy for that matter. Making friends is hard to do. There’s Miranda, his nearest neighbor who isn’t very near since they live way out in the desert. He’d like to know Miranda better. Then there’s Max, who picks on Dustin. Yes, it’s a tough beginning for Dustin in his new home.
If only he could do something to make himself famous, Miranda might pay attention to him and he might remind his dad he has a son. When a tiny, tiny spaceship crash lands out in the desert, Dustin sees his chance. As has happened for most of his life, things turn out a lot different than he has planned. I’m not going to give anything away, but be prepared for an adventure you won’t soon forget as you travel along with Dustin, Miranda, and Max on a journey that only seventh-graders could think of.
K. L. Pickett has written a fun story that young readers and older readers alike should enjoy. SEVENTH GRADE ALIEN HERO might remind you of those days when you were a kid and believed that most anything could happen if you wanted it enough. I recommend this book for school libraries, public libraries, and your own personal library.
###
Available at:
MUSEITUP PUBLISHING  AMAZON and other places where eBooks are sold.
Happy Reading!
﻿

Posted by Beverly Stowe McClure at 7:00 AM