Welcome Wednesday. Thanks for stopping by. I have a couple of reviews for you today. Warning: They're kind of spooky, well, one is really spooky. The other one just a little. I'll let you figure out which is which. Enjoy 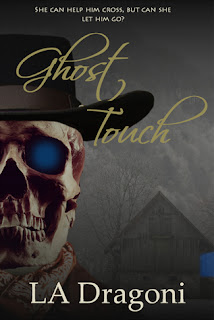 Spooky Cover!
GHOST TOUCH Review
By La Dragoni
What if at a certain time each night, your barn, garage, house was filled with ghosts? You say you don’t believe in ghosts. Okay. But what if?
In GHOST TOUCH, by Author La Dragoni, Tamara believes in ghosts. In fact, she has proof they exist. Every night ghosts appear in her barn, hundreds, thousands of them. It isn’t bad enough that she’s still grieving over her mother’s death a few months earlier, she has to find a way to get rid of the ghosts. Between having to deal with the ghosts, falling for Cal, a cowboy ghost, and discovering that Dex, the live guy she works with at her job, is rather appealing too, Tamara has plenty of trouble.
The author does a nice job describing Tamara’s confused state of mind as she struggles with decisions of what to do. I could picture the ghosts as they swarmed out of the barn. Shudder. Not a pretty sight. However, I kind of agreed with Tamara that the cowboy ghost, with his polite way of talking was nice, even though he was skinless, just bones, and had a cold touch. Perhaps this is a reminder that the outward appearance of a person is not as important as what’s in their heart. I  really liked Dex and hoped things would work out for Tamara and him. No, I’m not telling.
When the unexpected happens, Tamara’s life gets really interesting. I enjoy a book that makes me look at life and people in a different way. GHOST TOUCH does just that. I’m looking forward to more from La Dragoni.
AMAZON 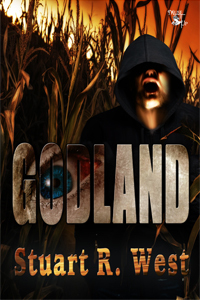 
If we could look behind closed doors, we might be surprised, even horrified, by what we see. Do we really know the family next door or the farmer in the country? Do we even care what they’re like, or is it easier simply to ignore those that might seem a bit different to us?


In Author Stuart R. West’s novel GODLAND, the reader meets a cast of characters that push the word “normal” to the limits. I’m not going to give anything away by describing each character, but the major players are people that you do not want as neighbors. There are a few characters that can be classified as “normal”, namely the teens Lindsay, Shannon and Gavin, well, as normal as teens are, but 300 pound Joshua, man-boy, 16 or 17 years old, will make you have nightmares or touch your heart or both. No, I can’t explain. You’ll have to read Joshua’s story to understand. For me, Joshua is the character that I wanted to help. I think you’ll understand why.


Mr. West is a master at creating characters that are so real you hope you never run into some of them on a dark street, or a daylight one for that matter. At least this reader has no desire to meet the real Edwin (father of Joshua) or his son. Are people really that warped? I guess so.


All I can say is read GODLAND with the lights on and even better with friends or family present to keep you in the real world. You certainly don’t want to get lost in GODLAND. I believe that the author has achieved his purpose of writing a story the reader will long remember and will avoid deserted country roads and lonely farm houses.