DRAGON OF THE STARS AND CASSA TRILOGY RELEASE


Today I have the pleasure of hosting Author Alex J. Cavanaugh and his latest novel, DRAGON OF THE STARS. Take a look at this cover. 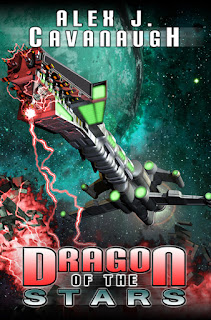 What can I say? It's gorgeous.
Dragon of the Stars
By Alex J. Cavanaugh
Science Fiction – Space Opera/Adventure/Military
Print ISBN 9781939844064 EBook ISBN 9781939844057
What Are the Kargrandes? http://whatarethekargrandes.com/
The ship of legends…
The future is set for Lt. Commander Aden Pendar, son of a Hyrathian Duke. Poised to secure his own command and marriage to the queen’s daughter, he’ll stop at nothing to achieve his goals.
But when the Alliance denies Hyrath’s claim on the planet of Kavil and declares war on their world, Aden finds his plans in disarray. Entrenched in battle and told he won’t make captain, Aden’s world begins to collapse. How will he salvage his career and future during Hyrath’s darkest hour?
One chance remains–the Dragon. Lost many years prior, the legendary ship’s unique weapon is Hyrath’s only hope. Can Aden find the Dragon, save his people, and prove he’s capable of commanding his own ship?
Purchase:
Amazon - http://www.amazon.com/Dragon-Stars-Alex-J-Cavanaugh-ebook/dp/B00S0DPUYU/ref=sr_1_1?s=digital-text&ie=UTF8&qid=1420814971&sr=1-1&keywords=dragon+of+the+stars
Barnes and Noble - http://www.barnesandnoble.com/w/dragon-of-the-stars-alex-j-cavanaugh/1121069418?ean=2940046510720
ITunes - https://itunes.apple.com/us/book/dragon-of-the-stars/id957912496?mt=11
Kobo - http://store.kobobooks.com/en-US/ebook/dragon-of-the-stars
Amazon UK - http://www.amazon.co.uk/Dragon-Stars-Alex-J-Cavanaugh-ebook/dp/B00S0DPUYU
Amazon print – http://www.amazon.com/Dragon-Stars-Alex-j-Cavanaugh/dp/1939844061/ref=tmm_pap_title_0?ie=UTF8&qid=1427824785&sr=1-1
Overdrive - https://www.overdrive.com/media/2130736/dragon-of-the-stars
Goodreads - https://www.goodreads.com/book/show/23521766-dragon-of-the-stars


Now, let's hear what Alex J. Cavanaugh has to say about writing.
The Best and Worst of Writing
Everyone has a favorite aspect about writing. Something that is fun and easy. Something that places us in the zone.
Of course that means there’s something about writing that we loath. (That seems a bit harsh. Strongly dislike? No, we’ll stick with loath!) It’s that one part that drives us crazy.
So, I’m going to share with you the best and worst of writing for me. Maybe you can relate.
My least favorite – the first draft.
That’s right! The first draft. Most writers are excited at that point. They have a shiny new idea and the words are flowing. Not this writer. I’ve prepped with a very extensive outline, but that doesn’t make it any easier. I struggle to get my thoughts onto the screen. Add to the fact I am a slow typist (350 words per hour, tops) and the painful process just drags on forever. There is only one thing that offsets the torture…
My most favorite – revisions.
Some of you are moaning already. But it really is my favorite part. Once those words are out of my head and on the page, I can do something with them. And after outlining to death, it’s not a giant mess. It is the bare bones, but I can see what I’m doing and flesh the story out. This where it’s real to me. This is where I can see the overall story and feel good about it.
What’s the best and worst things about writing for you?
﻿
About the Author:
Alex J. Cavanaugh has a Bachelor of Fine Arts degree and works in web design, graphics, and technical editing. A fan of all things science fiction, his interests range from books and movies to music and games. Online he is the Ninja Captain and founder of the Insecure Writer’s Support Group. He’s the author of Amazon Best-Sellers CassaStar, CassaFire, and CassaStorm.
http://alexjcavanaugh.blogspot.com/
http://www.insecurewriterssupportgroup.com/
http://twitter.com/AlexJCavanaugh
﻿
﻿
Thank you, Alex, for sharing your thoughts with us today.
Now get your copy of DRAGON OF THE STARS, Everyone.
Wait! There's More! Three in One! 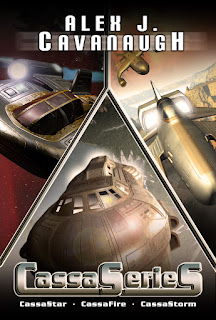 Release date - June 22 2015
CassaSeries
By Alex J. Cavanaugh
ISBN 9781939844118
Price - $5.99 eBook boxed set
Science fiction/adventure (FIC028010) and science fiction/space opera (FIC028030)
The Amazon Best-Selling Series!
CassaStar - Few options remain for Byron. Slated to train as a Cosbolt pilot, Byron is determined to prove his worth to his instructor, Bassa. As war brews on the edge of space, Bassa must make a decision that could decide the fate of both men. Will their skills be enough as they embark on a mission destined to stretch their abilities to the limit?
CassaFire - Byron’s days of piloting Cosbolt fighters behind him, the detection of alien ruins sends him to the planet of Tgren. Forced to train a Tgren named Athee and deal with an eager young scientist, he feels invaded. Tensions mount as the ruins reveal a potential weapon, plunging him further into the chaos. All Byron wanted was his privacy…
CassaStorm - Commanding the base on Tgren, Byron watches as a galaxy-wide war encroaches upon the planet. When the war hits Tgren, it triggers nightmares in his son. The ancient alien ship begins transmitting a deadly code and the probe that almost destroyed Tgren twenty years ago returns. The storm is about to break, and Byron is caught in the middle…
Find it here:
http://www.amazon.com/gp/product/B00ZAP5PV4?*Version*=1&*entries*=0
http://www.amazon.co.uk/gp/product/B00ZAP5PV4?*Version*=1&*entries*=0
http://www.barnesandnoble.com/w/cassaseries-alex-j-cavanaugh/1122097909?ean=294015196217
https://store.kobobooks.com/en-US/ebook/cassaseries
https://www.goodreads.com/book/show/25705316-cassaseries
Alex J. Cavanaugh has a Bachelor of Fine Arts degree and works in web design, graphics, and technical editing. A fan of all things science fiction, his interests range from books and movies to music and games. Online he is the Ninja Captain and founder of the Insecure Writer’s Support Group. He’s the author of Amazon Best-Sellers CassaStar, CassaFire, and CassaStorm.
http://alexjcavanaugh.blogspot.com/
http://www.insecurewriterssupportgroup.com/
http://twitter.com/AlexJCavanaugh