THE SHADOW OF THE UNICORN II REVIEW

Monday Musings
Well, we prayed for rain. God answered. The lake levels are rising. Our pond has overflowed its banks. Our son has stocked it with fish, the way it used to be. I'll post pictures Wednesday.
Along with the good, there sometimes is the bad. It was a wild weekend. Tornado warnings, dark clouds, more rain. Warnings went out to get to your storm shelters. I sat in the closet and listened to the TV weatherman  tell what was happening. I also wondered how I'd get two cats into the closet. You know how independent cats are. Let me tell you, God answers prayers. The circulation in the clouds never touched the ground. Pictures later shown on TV were spooky. But our little town and the areas around were safe. Oklahoma did not fare so well. Some areas there have had a rough spring.
Saturday afternoon, before the weather advisories, I had a book signing. Will tell about it on Wednesday too.
But for now, I have a review to share with you. Remember the interview I did last week with Suzanne de Montigny? Today, I'm reviewing her lovely book. So relax for a few minutes and enjoy. 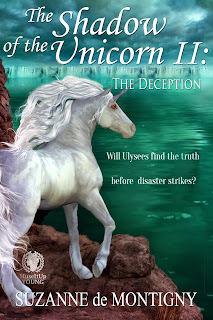 I think unicorns are lovely animals and this cover proves it.
The Shadow of the Unicorn: The Deception (The Shadow of the Unicorn Series Book 2) Review
By Suzanne de Montigny
Once upon a time, in a magical land, there lived magical creatures. Like most animals, whether real or magical, they wanted to live and be happy with their families. Sometimes, however, dangers threaten and creatures, animal or human, have to learn who to trust and how to face their challenges.
In Author Suzanne de Montigny’s novel THE SHADOW OF THE UNICORN II: THE DECEPTION, written for middle grade readers, we meet some of these magical animals and some not so magical humans. The book opens with the birth of Ulysses, the colt of Unicorns Icarus and Sarah. As Ulysses grows and learns the ways of his family of unicorns he also discovers secrets that he wants answered. So Ulysses and his friend Teo set out to find the truth. On the way they encounter humans and a dinosaur and get themselves into more trouble than they could ever have imagined.
Suzanne de Montigny has written a lovely story of family and bravery. The unicorns can do magical things, but they also seem real, like flesh and blood animals. They’re so likeable that I think having one of my own, not just as a pet but as a friend, since they can talk, would be great. When Ulysses faced danger, I faced it with him. Every step of the way I hoped he’d make the right decisions.
As much as I liked the first book in the series, this novel was even better. Even though it’s written for children, I think all ages will enjoy reading THE SHADOW OF THE UNICORN II: THE DECEPTION. I believe you will fall in love with the unicorns.  And who wouldn’t like a big old dinosaur from years and years ago? Also, if you haven’t read the first book, THE SHADOW OF THE UNICORM: THE LEGACY, BOOK I, what are you waiting for?
###
Find the book here:
http://www.amazon.com/Shadow-Unicorn-Deception-Book-ebook/dp/B00TVTPB50/ref=sr_1_1?s=books&ie=UTF8&qid=1424798163&sr=1-1&keywords=the+shadow+of+the+unicorn+II%3A+The+Deception
They’re also available at all major book sites like Kobo, Nook, iBooks, or MuseItUp Publishing.


Happy Reading.
﻿
Posted by Beverly Stowe McClure at 5:00 AM