Welcome Author Christine Amsden today with her latest novel, MADISON'S SONG, a spin-off sequel to the Cassie Scot series, one of my favorite series. It's been awhile since I posted reviews of the books in the series. And I'm so happy the author has another book for us to enjoy. 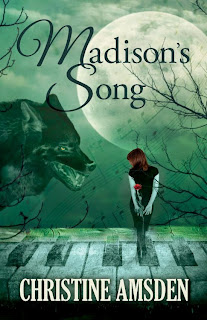 This cover sure grabs my imagination. I love it.
Blurb:
﻿
Her voice is enchanting; his soul is black…

Madison Carter has been terrified of Scott Lee since the night he saved her from an evil sorcerer – then melted into a man-eating monster before her eyes. The werewolf is a slave to the moon, but Madison’s nightmares are not.
Despite her fears, when Madison’s brother, Clinton, is bitten by a werewolf, she knows there is only one man who can help. A man who frightens her all the more because even in her nightmares, he also thrills her.
Together for the first time since that terrible night, Scott and Madison drive to Clinton’s home only to discover that he’s vanished. Frantic now, Madison must overcome her fears and uncover hidden strengths if she hopes to save him. And she’s not the only one fighting inner demons. Scott’s are literal, and they have him convinced that he will never deserve the woman he loves.