A TO Z CHALLENGE - "V" IS FOR VARIABLE FLYING FOX

The Island orVariable Flying Fox is a medium sized fruit bat. They have a wingspan of about 4 ft. and weigh around 1.5 lbs. There are 16 subspecies and they are found in the Andaman and Maldives Islands; New Guinea through Indonesia to Vietnam and Thailand, and adjacent islands; Philippines. Solomon Islands - Learn more at: http://lubee.org/bats/our-bats/island-flying-fox/ 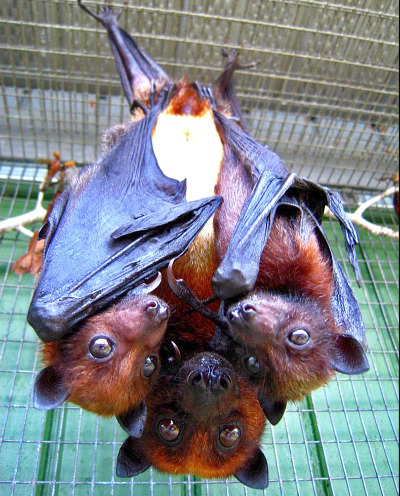 Rare Variable Flying Fox pup twins with mom. Photo credit: S. Mulder, Lubee Bat Conservancy
Last year the Lubee Bat Conservancy in Gainesville, Florida welcomed twelve bat pups, including the rare birth of twins by mother Variable Flying Fox "Charisma." This organization is dedicated to conserving "fruit and nectar" bats because these animals are vital to pollination and seed dispersal in many of the world's jungles. The evolutionary origins of bats are a subject of much debate but they are most certainly NOT flying rodents. Once thought to be more closely related to shrews and hedgehogs, recent genetic evidence suggests bats may be more closely related to carnivores like bears, dogs and cats. (Information from http://www.zooborns.com/zooborns/2010/03/baby-bat-pups-at-lubee-bat-conservancy.html )﻿
Posted by Beverly Stowe McClure at 5:00 AM