A TO Z CHALLENGE - "U" IS FOR UNICORN

Unicorns. Whether you believe they ever existed or are just legend, they are fascinating animals. Unicorns are not found in Greek mythology but in natural history because Greek writers were convinced they were real. They have been associated with royalty and heraldry since the time of the Romans. In the 5th Century A D a passage in the Hebrew Old Testament described an animal that scholars believed was a Unicorn. 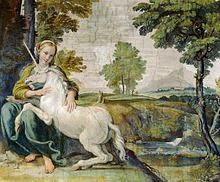 Wikipedia
fresco, probably by Domenico Zampieri, c. 1602 (Palazzo Farnese, Rome)
It was believed that a Unicorn's strength was in its horn and also that the horn carried magical and healing medicine.
I just finished reading THE SHADOW OF THE UNICORN II: THE DECEPTION, the second book in a series for children by Suzanne de Montigny. Lovely story about Unicorns. So, I believe. Why not? Many animals have become extinct through the years. Unicorns might be one of them.
What do you think?﻿
Posted by Beverly Stowe McClure at 5:00 AM