A TO Z CHALLENGE - "T" IS FOR TASMANIAN WOLF OR TIGER

The Thylacine, also known as the Tasmanian Wolf or Tiger, a carnivorous marsupial, is considered extinct. The modern thylacine appeared about 4 million years ago. Many examples of thylacine engravings and rock art dating to 1000 BC have been found. Little is known about their behavior or habitat. The last known thylacine to be killed in the wild was shot by a farmer in 1930. 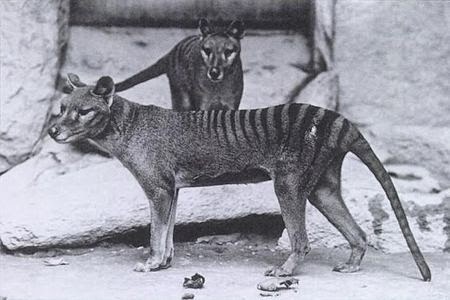 Photo Wikipedia
The last captive thylacine was captured in 1933 and taken to the Hobart Zoo on the Australian Island of Tasmania. It died in 1936 as the result of neglect. It is believed the animal was locked out of its sleeping quarters in freezing temperatures. 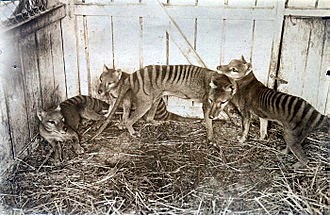 Photo Wikipedia
Beaumaris Zoo in Hobart, 1910
Animal Family at the Zoo.
An excellent website to see why these animals became extinct is:
﻿
http://www.naturalworlds.org/thylacine/
More neat pictures and information.
Happy Reading.﻿
Posted by Beverly Stowe McClure at 5:00 AM

Email ThisBlogThis!Share to TwitterShare to FacebookShare to Pinterest
Labels: A to Z Challenge, carnivore, marsupial, Tasmanian Wolf or Tiger