I found another cat to talk about. Imagine that. For the letter "J" we'll look at the jaguar.

The jaguar is the largest feline on the American continent, with jaguars also being the third biggest cat in the world behind the African lion and the Asian tiger. Jaguars have the strongest bite force of all the cats and like other pantherines they can roar.

The jaguar is the New World's only large cat species. It looks like a leopard, but it has whorled spots with dark centers.

Most jaguars are tan or orange with distinctive black spots, called "rosettes" because they are shaped like roses. Some jaguars are so dark they appear to be spotless, though their markings can be seen on closer inspection. 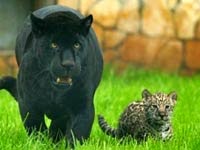 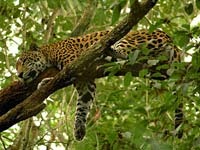 I don't think I'd want one of these for a pet. How about you?