A TO Z CHALLENGE - I - INDIAN STAR TORTOISE

The Indian star tortoise is a medium sized tortoise found in the dry and arid forests of central and southern India and also in Sri Lanka. It gets it's name from the star-like patterns on its shell. 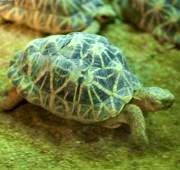 Isn't that a pretty shell?﻿

Because of the unusual shell it is a popular pet in the world's exotic pet trade. The design on the shell helps protect it from predators, but it does have to watch out for large birds of prey and snakes, as well as humans that that eat them and capture them for the pet trade. It's a vegetarian, dining mostly on leaves, fruits and berries and flowers.

Do you have a pet tortoise?
Posted by Beverly Stowe McClure at 5:00 AM