A TO Z CHALLENGE - DOGS

A dog, man's best friend they say, and that is true of most dogs. Today, we'll take a brief look at dogs.

At least 12,000 years ago dogs became the first animals to be tamed. Today, about 49 million dogs live as pets in the United States. That's a lot of dogs. Dogs come in all sizes. The smallest is the Chihuahua. They weigh about 4 pounds and are 5 inches tall at the shoulders. The Irish Wolfhound is the tallest dog at about 34 inches tall. The St. Bernard is the heaviest at as much as 200 pounds. There are about 800 species of dogs in the world.

Do you have a dog in your family. I don't but my son's dog pays me regular visits. He likes my scraps. Son calls him Mooch. I call him Traveler. He's another little stray. We get a lot of those out in the country. Traveler is at least part Blue Heeler, and he just showed up one day. I think he ran away from his home on the road behind us. Anyhow, he adopted our family. He's getting old now. Been around awhile. I have to show you this picture. It was taken in 2009, when we had a really snowy winter, which is unusual for our area. 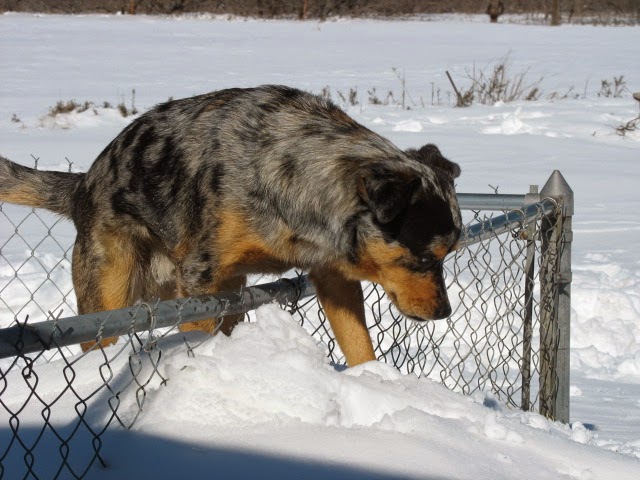 I had thrown some bread out for the birds, and Traveler climbed the fence to get to it. He loves to eat.

Traveler also made some money for me. I sent a story about him saving my husband from a rattlesnake in the backyard, and CHICKEN SOUP FOR THE SOUL WHAT I LEARNED FROM THE DOG published it. Pretty cool.

What's your favorite dog?
Posted by Beverly Stowe McClure at 5:00 AM

Email ThisBlogThis!Share to TwitterShare to FacebookShare to Pinterest
Labels: A to Z Challenge, dogs, snow