TEX AND THE GOD SQUAD

He's back. Tex from TEX, THE WITCH BOY and TEX AND THE GANGS OF SUBURBIA has more adventures in store for his readers. As usual, Tex's life is never dull. Let's see what he's up to now. 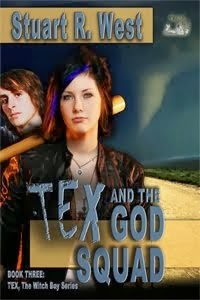 TEX AND THE GOD SQUAD Review


The senior year of high school is exciting, scary, and the end for students, the end of friendships as they each go their own way, the end of detention and bad cafeteria food, the end of life as the students know it. It’s also a beginning of new friendships, new schools or jobs, and a future that’s uncertain and scary too. And, if you’re Richard (Tex) McKenna, senior at Clearwell High, besides worrying where you’ll attend college and who will take care of your wheelchair bound father if you go away, you also have to deal with suicide, a cult spreading hate about gays and other sins, another witch boy, and a couple of murders. Never a dull moment at Clearwell High.


In TEX AND THE GOD SQUAD, the third book of the Tex series, by Author Stuart R. West, Tex McKenna and friends are back, along with some new characters. School is almost out. In addition to trying to decide what university to attend after graduation, Tex is a prime suspect in every death that occurs since he seems to always be at the scene of the crime. Tex (a witch) doesn’t like to use his magic unless absolutely necessary, but the police are having little success discovering the killer so Tex might have to intervene. I don’t want to say too much and give anything away, so I’m stopping here, except to say there are some surprises along the way that I wasn’t expecting. Love it when that happens.


The author has written a story that points out just how far some people/groups will go in their hatred for those they believe are evil or different or whatever they believe of them. TEX AND THE GOD SQUAD is a story of teens doing the best they can under their circumstances. It’s a story of friendship, family, love, and facing the future as uncertain is it might be. All high school and middle school libraries, as well as public libraries should have a copy of this novel in their e book catalog. You’ll want one for your own e-reader too.


###
Happy Reading
Posted by Beverly Stowe McClure at 6:00 AM