Remember a few days ago when Award Winning Author Christine Amsden visited and talked about series books? Well, I read her latest fantasy novel, MIND GAMES, and would like to share my thoughts with you. 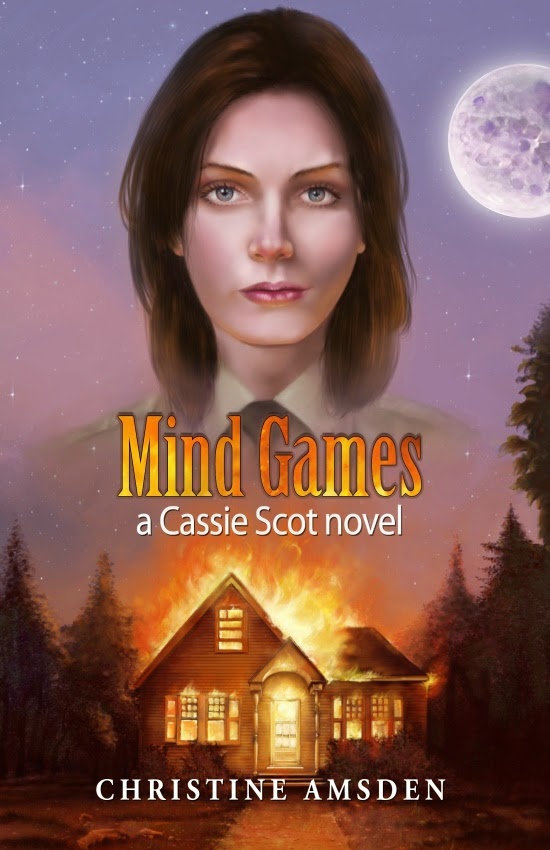 Synopsis:
Beware your heart and soul…

Evan broke Cassie’s heart two months ago, and she still doesn’t know why. She throws herself into family, friends and her new job at the sheriff’s department, but nothing helps. The only thing that finally allows her heal and move on is the love of a new man, mind mage Matthew Blair. Cassie finds him…irresistible.
Matthew may also be the only one who can help keep the non-magical residents of Eagle Rock from going crazy over the murder of a beloved pastor’s wife. It looks like a sorcerer is to blame, but while Cassie tries to figure out who, others take matters into their own hands. With tensions running so hot, a single spark might set Eagle Rock ablaze.

Sometimes love hurts. Sometimes love is complicated. Sometimes it’s time to move on to a new love, to a new life. This is what Cassie Scot does in Award Winning Author Christine Amsden’s latest novel MIND GAMES: A CASSIE SCOT NOVEL. Or rather what she tries to do. If only her ex-boyfriend would cooperate.

Cassie Scot, star of Christine Amsden’s CASSIE SCOT Mystery series, is back, along with old familiar characters (if you’ve read books one and two) and the addition of some interesting new characters. You’ve heard of love triangles. Well, Cassie is caught in one of those. Her triangle is a bit different to the norm, however. Evan Blackwood, her old flame, has magical powers. Matthew Blair, her new beau, is a mind mage. They’re both determined to protect Cassie, especially from each other. As if two wannabe heroes aren’t enough to deal with Cassie, who has no magic at all, soon finds herself, along with Wesley Blake, her new partner at the sheriff‘s office where she works, investigating a fire, a death, and other weird happenings in town. As she grows closer to the truth, she also discovers more secrets about her past. Sometimes the truth is painful, too.

I adored books one and two in the series and was excited when MIND GAMES was published. It did not disappoint. Cassie is brave though not perfect. She makes mistakes. She has doubts. In other words, she’s human, not just a paper character in a book. The author is great at creating characters that are so real the reader can identify with them, the good and the bad ones. Ms. Amsden is also good at throwing in surprises and twists and turns. More than once I said, “I didn’t see that coming.” Since the novel contains a huge cast of characters, keeping track of all of them could be confusing. The author has taken care of that with a listing of the characters at the back, reminding the reader who each one is.

I recommend MIND GAMES and the other books in the series for your reading enjoyment. Good news: STOLEN DREAMS, Book four in the series is scheduled for release in July, 2014. I’m so glad because the ending of this book demands more. Happy Reading.


In case you have trouble with the hyperlinkes: Christine Amsden has been writing fantasy and science fiction for as long as she can remember. She loves to write and it is her dream that others will be inspired by this love and by her stories. Speculative fiction is fun, magical, and imaginative but great speculative fiction is about real people defining themselves through extraordinary situations. Christine writes primarily about people and relationships, and it is in this way that she strives to make science fiction and fantasy meaningful for everyone.


At the age of 16, Christine was diagnosed with Stargardt’s Disease, a condition that effects the retina and causes a loss of central vision. She is now legally blind, but has not let this slow her down or get in the way of her dreams.


In addition to writing, Christine teaches workshops on writing at Savvy Authors. She also does some freelance editing work.


Christine currently lives in the Kansas City area with her husband, Austin, who has been her biggest fan and the key to her success. They have two beautiful children.

And don't forget the Giveaway. Here it is again if you haven't entered: