MEET MIKKI SADIL, AUTHOR OF CHEERS, CHOCOLATE, AND OTHER DISASTERS

Welcome!
Today, I have the pleasure of hosting Mikki Sadil, author of CHEERS, CHOCOLATE, AND OTHER DISTERS, and THE FREEDOM THIEF. Mikki was kind enough to answer some of my questions. Take it away, Mikki.
Hi, Mikki. Welcome to my blog. Please tell us about yourself and how you became a writer.
Thank you for hosting me, Beverly. I was born on a horse ranch in Texas, traveled with my military father all over the US and in several foreign countries as a child, and ended up in California. Both parents were great readers, and my mother was a writer and a poet. I started writing as a child, and continued on into my college years, but never gave much thought to becoming an author. Eight years ago, my daughter sent me a box of “how to write for kids” books, with a note telling me to get off my, er, you know, and start writing for real. I enrolled in the Institute of Children’s Literature, and published my first non-fiction article in a national children’s magazine during my first course at ICL. Since then, I’ve published more than 30 stories and articles in magazines, an anthology, and for an online educational publisher, as well as my two books.

When you were a child, what did you want to be when you grew up?
Actually, I wanted to raise and train Quarter Horses. I realized that childhood dream with my second marriage: my husband and I built a ranch and raised and trained Appaloosa horses. But I still had a Quarter Horse mare and stallion!
How did you come up with the idea for your book and were there any glitches along the way?
Glitches? A few, but mostly of my own doing. Cheers, Chocolate, and Other Disasters was written as the assignment for my first advanced novel course with ICL. My instructor was quite pleased with it, but for a time it was just “another” story for me. I had worked so hard on my first real novel, which became The Freedom Thief, and I really wanted to get that one edited, revised, polished, and sent off to a publisher. So the Cheers book sat and gathered dust for quite awhile. After MuseItUp Publishing accepted the Thief book, I went back to Cheers. Over time, however, my thoughts about this story had changed, so I had a lot of rewriting to do. After Muse accepted the manuscript, my editors didn’t want the original title. It was way too long, and one part of it indicated “bullying”, and my editors didn’t want it in the title. The story is about a kind of psychological/emotional bullying but it shouldn’t be in the title. So it took a few emails back and forth between the editors and me before I came up with a title everyone was happy with.
If we peeked inside your closet, what would we see?
Lots of lavender! My favorite color, so I wear a lot of it. Let’s see, you would find some dressy pants and blouses/sweaters, and a whole LOT of jeans, boots, T-shirts and sweatshirts. I don’t like dresses, had to wear them all the years I was teaching at the university, and seldom if ever wear one now. I’d get home from school and couldn’t wait to change into my ranch clothes: jeans, boots, and depending upon the weather, either a T shirt or a sweatshirt. We are retired now, no longer on our ranch, but…you know, you can take the girl out of the ranch but you can’t take the ranch out of the girl. LOL
Tell us your favorites:
Movie
Actor
Actress
Book
Singer or Group
My favorites are from the days when movies had real stories and plots, and weren’t just horror for the sake of its shock value, or the ridiculous science-fiction stuff that is all the rage today. I love the movies made by actors and actresses like John Wayne, Glen Ford, Gregory Peck, William Holden, Humphrey Bogart, Clint Eastwood, Kirk Douglas, and Paul Newman. Actresses: Audrey Hepburn, Grace Kelly, Elizabeth Taylor, Lauren Bacall, Barbara Stanwyck…the list goes on, and in my opinion, there isn’t an actor or actress today that can begin to compete with these men and women. The movies: The Godfather, Casablanca, Singin’ in the Rain, Lawrence of Arabia, The Indiana Jones movies, To Kill a Mockingbird, and on and on. Real stories, not just shock and violence and these silly space alien invasions. My favorite books are too many to mention, as are singers. But, again, none are of “today’s” genre.
Coffee or tea?
Coffee of different flavors…we have a Keurig, so we enjoy many different kinds of coffee.
Spring, Summer, Fall, or Winter?
Winter and Spring, for the cold and the rain…which California doesn’t have nearly enough of. Summer is way too hot, and Fall is too indecisive!
If you could have super powers what would you wish for?
I guess a lot of people would wish for the power to cure all human suffering and for world peace. That’s a noble wish, and one, I think, we ALL wish for. But if I had some kind of super power, I would wish for enough land and enough money to take care of, for life, every single abused, forgotten, abandoned, and lost dog, cat, and horse in the whole universe.
If you could choose to live in another time, would you prefer the past or the future?
Seriously? In the past, when life was so much simpler than it is now. When the main electronics in your home were your telephone, TV, and radio. When “trust” and “honesty” and “ethics” were not just words in a dictionary, but words you lived by and taught your children to live by. When friends and neighbors were a part of your family. When you could send your children outside to play, and not panic if they didn’t answer the first time you called them. When your kids preferred to read books and play sports than to spend hours playing violent and stupid video games because their parents weren’t around to monitor and guide them. When the world was just a better place to be in than it is now, and was without the amount and kind of violence we have to deal with on a daily basis.
What is something about you that no one knows?
LOL. I’m laughing because I think most anyone who wants to know anything about me probably knows everything. I’m not a very complicated person.

Are you working on any new books now? Tell us about them.
My WIP is an historical/paranormal/mystery. Historical because it is set in a traveling carnival in the early days of the Great Depression. Paranormal in that there are psychic abilities, gargoyles, and witches…no very over-done vampires or werewolves. A mystery because it concerns the murders of three small girls, and the whole town that has kept those murders a secret for many years. The name of the novel is Beneath The Possum Belly: Night Cries, and is the first of a trilogy. And no, I’m not going to explain what “possum belly” means, except to say that it has nothing to do with a real possum!
Where can your fans learn more about you?
Website:
Blog: www.mikki-wordpainter.blogspot.com
Facebook: I’m on FB, Twitter, and Goodreads, as well as Linked-In, but don’t have a fan page and probably never will have. I don’t care much for the social media stuff. I do have an author’s page on Goodreads, and on Amazon.
Twitter:
Goodreads:
Other:
Would you like to share anything else with your fans?
My books, The Freedom Thief and Cheers, Chocolate, and Other Disasters, are for kids from 10-14, and are written appropriately for their enjoyment. I hope you all will give them a try. They are ebooks, and are available at the MuseItUp bookstore, and on Amazon, Barnes and Noble, Kobo, and most other ebook distributors. Thanks for stopping by Beverly’s blog and reading this interview. I appreciate it.
Thank you for taking time out of your busy day to visit with us. Stop by anytime.

Thanks, Beverly, for having me on your blog. I liked your questions, and enjoyed answering them. Hope I wasn’t too long-winded.

Wow! What an interesting author.
Now, about the books: 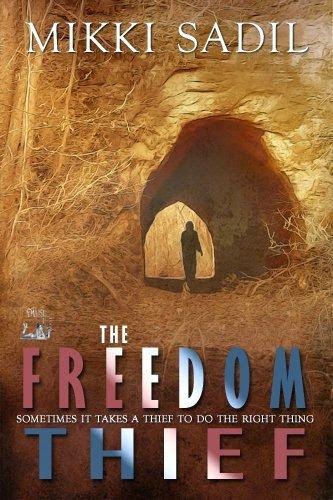 Sometimes it takes a thief to do the right thing.

It’s the middle of the night. A surreptitious journey begins into an unknown world of hostility, danger, and deception.

Thirteen year old Ben McKenna leads his slave friend Joshua, and Joshua’s parents, Bess and Jesse, in a daring escape from the plantation Ben’s grandmother owns. Unless they make good their escape, Ben’s father will sell the crippled Joshua, punish his parents, and possibly imprison his own son.

A collapsing tunnel nearly buries them alive, a dangerous swamp threatens to drown them, and deceptive ‘rescuers’ keep them imprisoned, forcing a daring, daylight escape. Everywhere they turn, they must outsmart deceitful “friends” and elude slave hunters. On the last leg of their journey, Joshua is almost captured when the four friends attempt to get past a Union fort. By the time they finally reach the Ohio River and the man who will take them across to freedom, more than three perilous and life-threatening months have passed since they left the plantation.

Will Ben cross the river with his friends, leaving behind his family and all he has ever known, in his effort to fight the conventions of slavery, or will he return home to face the consequences of his actions?

CHEERS, CHOCOLATE, and OTHER DISASTERS 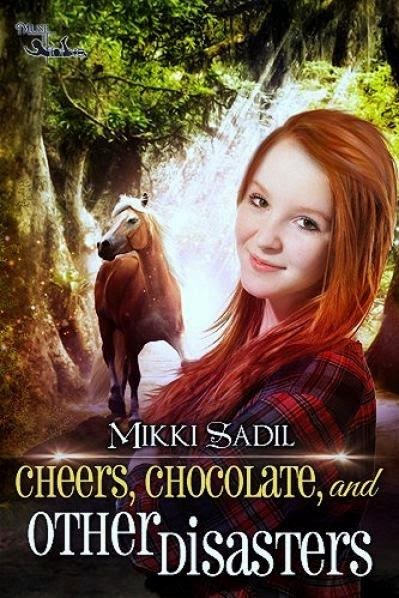 
When the new girl comes to town, nothing in AJ’s life is safe from disaster, not even cheerleading and chocolate.

Speaking of cheerleading, my new partners are Lisa and Amberley, (thanks to Celine), who are the most disliked girls in school. And that’s not all. My parents are divorcing. My mare got hurt. There’s a new woman in my dad’s life. My whole world is upside down. I mean, you’d think Celine was some kind of evil omen, wouldn’t you? Although, Amberley becomes the one bright light in…well, I guess you’ll have to read my story to learn about Amberley, and what happens to her, to me, and to Celine.

I can't wait to read these.

About the Author, MIKKI SADIL:

From the time I published my first poem at age ten, and first short story two years later, I’ve had a passion for writing. As so often happens when you are young, however, life got in the way and I didn’t write much during the years of college, marriage and children, university teaching, and a divorce and remarriage. After my husband and I retired from twenty-two years of breeding and training Appaloosa horses, I returned to writing. My stories and articles have been featured in national children’s magazines, in online magazines, in an educational website, and in an anthology of horror stories for teens. My debut novel, The Freedom Thief, came out in November, 2013, and is an historical adventure for boys (mostly) age ten to thirteen, set in pre-Civil War Kentucky. Cheers, Chocolate, and Other Disasters is a contemporary novel about psychological bullying, and is for girls (mostly) age ten to thirteen.

I live on the Central Coast of California with my awesome husband and our beloved zoo of one way-too-smart Corgi, Dylan, one fat Siamese, Mr. Beaujangles, and one bossy African Gray Parrot, Shadow.

Thanks to all for visiting today. Comments are welcome.

Happy Reading.
﻿
Posted by Beverly Stowe McClure at 5:00 AM