Welcome to the last week of January and to Author Mary Waibel's Oh What a Knight! Tour. I am excited to share Mary's novel with you. 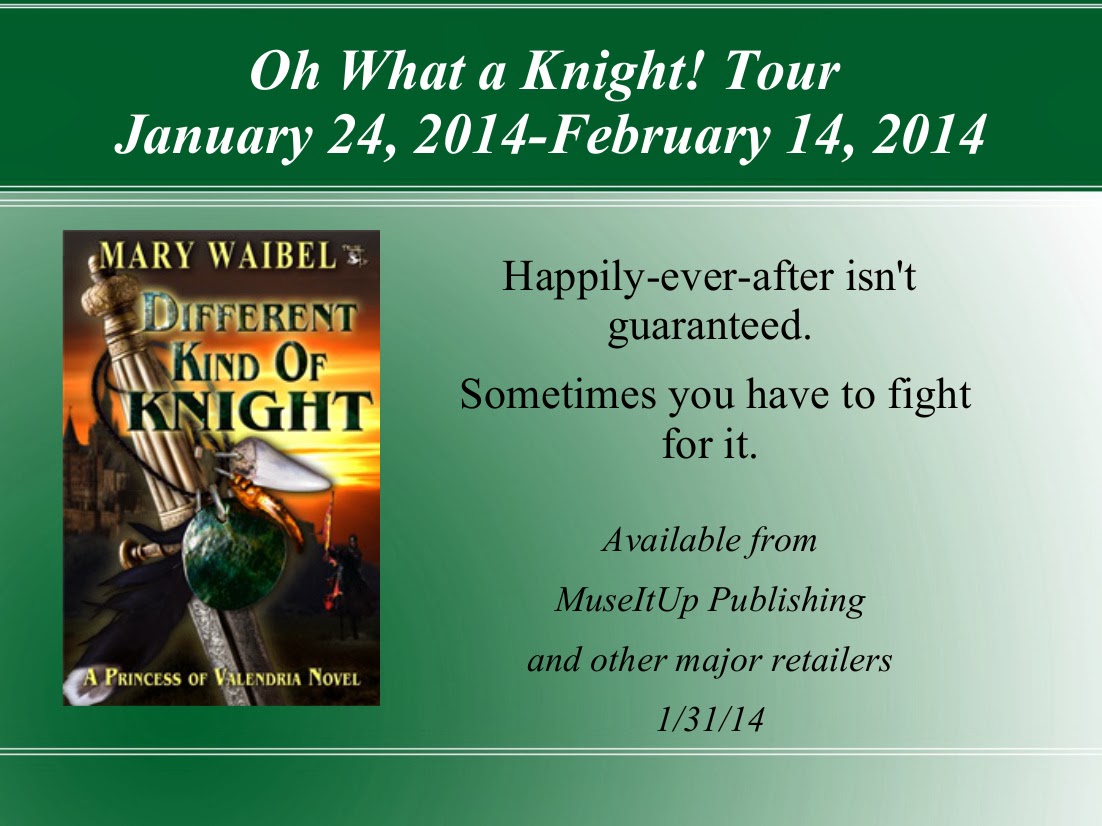 
﻿
DIFFERENT KIND OF KNIGHT
Through a twist of fate, Princess Gabrielle became First Knight of the King’s Elite Guard, a position always held by the second born male. She's spent years proving to the Minsters of Faldaera she is capable of leading the king’s Army.

When mythical creatures plague her kingdom, Rielle is sent to capture Captain Brody, the alleged culprit behind the attacks and the man who broke her heart four years ago.

Brody, Crown Prince of Delphine, is living in self-imposed exile, atoning for the sins of his father. But Fate has different plans for him. Tired, beaten down, and ready to give up on life, he is tossed into the path of the one person he would do anything for―Princess Gabrielle.

With a traitor in her ranks, and a mark on her head, Brody joins forces with Rielle, hoping to keep the woman he loves safe. Happily-ever-after is not guaranteed, and mythical creatures aren’t the only danger the couple face. As battles rage, Rielle has the chance to prove herself a capable leader, but will doing so cost her the love of her life? 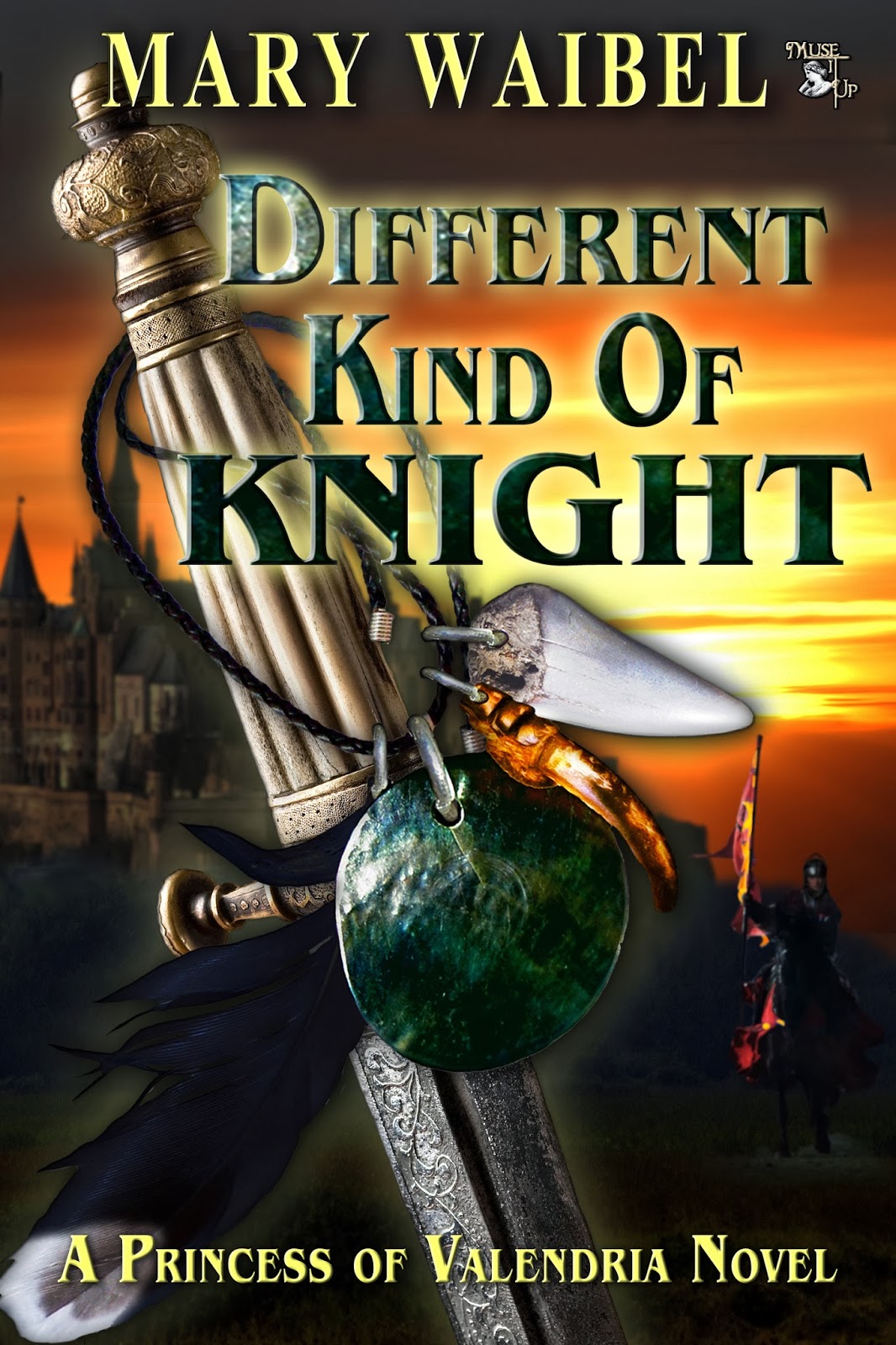 A neat cover. We know something exciting will happen when we open the book.﻿
Rielle dropped to her knees and rolled Brody over to his back. Dark red coated his chest. Desperate, she pressed her hands against the wound in a vain attempt to save him.
“Brody! Stay with me. Don’t you die. You can’t die.” The words tumbled out as tears blurred her vision and blood covered her hands.
She lost all sense of time and place, completely ignoring the danger of the knights surrounding them. Tears threatened, and she blinked them away, not wanting the man she loved to see her so weak.
“Brody, please. Stay with me. You can’t die. I won’t let you. Not until I’ve told you my secret.”
He opened his eyes and looked at her, his gaze weak and unfocused. She could tell she fought a losing battle, but she refused to give up
He licked his lips, his breathing turning ragged. “Tell me now,” he gasped, his words barely a whisper.
“I love you,” she whispered, smiling as tears streamed down her cheeks.
His eyelids slid closed, and a smile curved his mouth.
“I—”
Rielle leaned in, desperate to hear his words, but there was no sound. No breath.
"SPECIAL OFFER FROM MUSEITUP PUBLISHING"  https://museituppublishing.com/bookstore/index.php/museitup/fantasy/different-kind-of-knight-detail 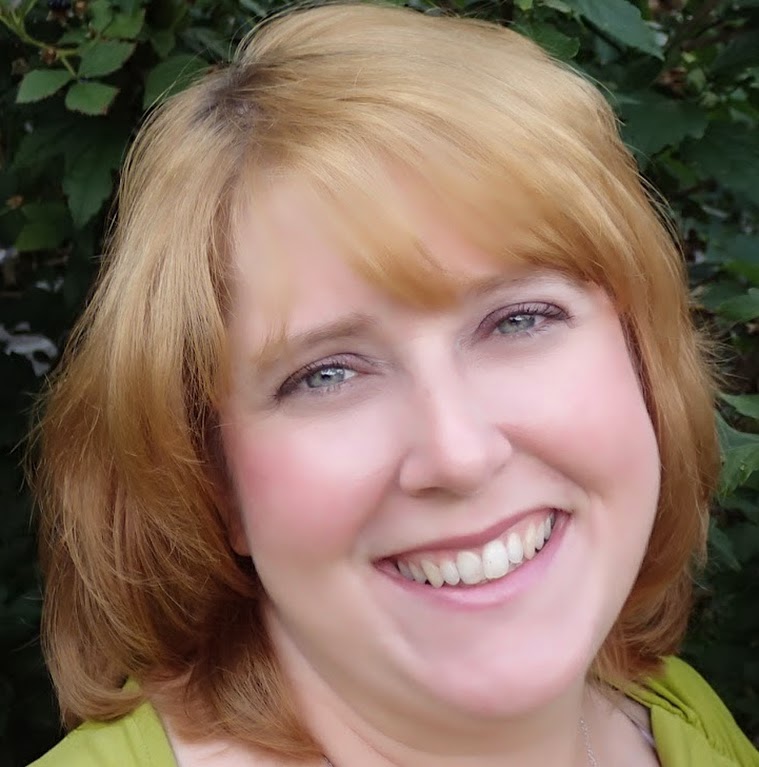 Mary lives with her husband, son and two cats. When she isn't twisting fairytales, she enjoys reading, playing games, watching hockey, and camping. Her Princess of Valendria series (Quest of the Hart, Charmed Memories, Different Kind of Knight) are available from MuseItUp Publishing and other major retailers. Her Faery Marked (book 1 in the Faery Series) will be available from BookFishBooks this summer.
You can find Mary Waibel at:
http://marywaibel.blogspot.com
https://www.facebook.com/authormarywaibel
@mewtweety14 (twitter)