I am delighted to host Author Christina Weigand today. She will be talking about her series  Palace of the Twelve Pillars: Book One and  Palace of the Three Crosses: Book Two Available at https://museituppublishing.com/bookstore/index.php/new-releases/palace-of-three-crosses-detail.  Sanctuary of the Nine Dragons: Book Three will be released in February 2014 from MuseItUp Publishing. 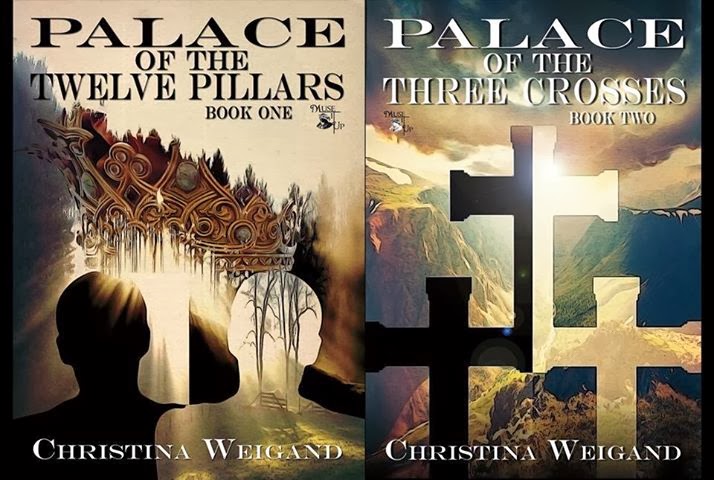 Intriguing covers, don't you think? Can't wait to see the latest one.

The cover for book three has not been revealed yet. Come back in February for a glimpse.

Joachim cringed as he thought about what he had to do. The council had decided. He didn’t agree completely, but in the end, Joachim knew it was the only way; something had to be done. Maybe Brandan would give him a reason not to send him away.

King Brandan stomped into the room. “Why, Brother, have you no throne prepared for your poor, missing brother? I’m hurt. I expected more from you and my sister-in-law. Maeve, dear, couldn’t you have helped him prepare better?” He stepped toward her, quickly grabbed her hand, and kissed it.

Joachim lunged at him, pushing him from the dais. Brandan staggered then regained his balance and gazed at his brother. “Why such violence, especially when I am so recently injured?”

Stepping off the dais, Joachim stood eye-to-eye with his brother. “Enough! You’re no more hurt than I am. And you have no business touching my wife, or sitting on Crato’s throne.”

Brandan laughed, pushed him aside, and stepped up to claim his throne. Joachim grabbed his twin's shoulder, spun him around, and punched him in the mouth.

Rubbing where Joa’s fist had landed, Brandan smirked. “Well, my brother has finally developed some stones.” He raised his other hand to hit Joachim.

Matthias stepped forward, sword in hand and grabbed his arm before he could hit Crato's king. He pulled the king’s brother away, so Joachim could reclaim his throne.

Jerking himself free, Brandan straightened his tunic. “This has been fun; but as you seem to be in no mood to visit, I shall take my leave. Come to me when you’re in a better frame of mind.”

“Stop! You are going nowhere until I say you can.”

Brandan stopped and looked at his brother. “What did you say to me? Is that how you talk to a fellow king and brother?”

“Yes, it is. As of this morning, you are no longer a king, and I’m not sure I should even call you brother.”

“Why dearest brother, whatever do you mean?” Brandan asked.

“Ever since we were boys, you have done everything you could to make trouble. I was always willing to forgive you and hoped you would change your evil ways. But no more! You have pushed me—pushed this country—too far this time,” Joa thundered at him.

“What are you rambling on about?” Brandan sneered and bit a fingernail.

“Brandan, I should sentence you to execution, but there are two things keeping me from that. First: you are my brother, and I hold onto a hope, however faint, you can be reformed…”

“Second, I strongly suspect you of making two attempts on my life. Unfortunately, I don’t have enough evidence to prove it was you. I punished one innocent man because of the little evidence we do have. I do not wish to make that mistake a second time.”

“As I said before, you won’t be going anywhere until I say so. I may not have what I need to sentence you to death, but after your actions toward the queen this morning, I have some recourse.”

“What are you talking about? I did nothing she didn't ask for.”

Maeve rose from her throne. Joa put his hand on her arm to stop her.

“Brandan, I suggest you remain quiet until I finish.”

“Brother, you do not have the authority to do this. We are equals.”

“Do you not see the Adept Council before you? We met and discussed this matter at length... They have given me the authority.”

“This tiresome group of old men?” Brandan laughed. “They have even less power over me than you do.”

Ignoring Brandan’s comments, the king continued. “First, I strip you of your title. You are no longer King Brandan but will henceforth be known simply as Prince Brandan.” He paused and swallowed. He didn’t know if he could continue. The lump in his throat felt as big as a koali fruit. He swallowed again. Maeve grasped his hand. Warmth and reassurance enveloped him. He knew what he had to do.

“When we have finished here, Rupert, Salochin, and Master Frederick will take you to Rupert’s tower. There, they will strip you of your magical powers. When they are finished, Matthias and Wilhelm will escort you to the Port of Wyrzburg, where you will be put on a ship bound for Hyogo, the prison island. There you will remain for the rest of your life. You are never to return to Crato or Mahorg. You will live in the mountain abbey with the monks and work side-by-side with them.”

“You’re a misguided fool.” Brandan sneered. “If you believe that by exiling me, you are saving yourself from evil—think again. You may have peace and rest comfortably for a short while, but don’t assume I won’t find a way to come back and destroy you.” He stepped up to the thrones and leaned forward, placing a hand on each. The guards on either side of the king stepped forward to stop him. Joachim raised his hand signaling them to stop.

Brandan glared at the guard and muttered, “Freisen!” The man froze where he stood.

Brandan turned back to his brother and sister-in-law. “No, Joa. This is not over and what I did to your guard is nothing compared to the evils you will suffer by my hand.”

While he was speaking, Rupert chanted a binding spell. Matthias came forward and placed his sword tip to Brandan’s back.

The king put his good hand on his brother’s shoulders and pushed him upright as he stood. “You have done enough! Matthias, escort him to Master Rupert’s tower.”

As the prince was escorted from the room, Joa slumped back into his throne. It was done, he thought as remorse washed over him. A tear crawled down his cheek as Maeve squeezed his hand.

Gets your attention, doesn't it.

There are no buy links for the forthcoming book yet, but check out Christina's sites for more information about the first books in the series and about the author.

Amazon: http://amazon.com/author/christinaweigand
About the Author: 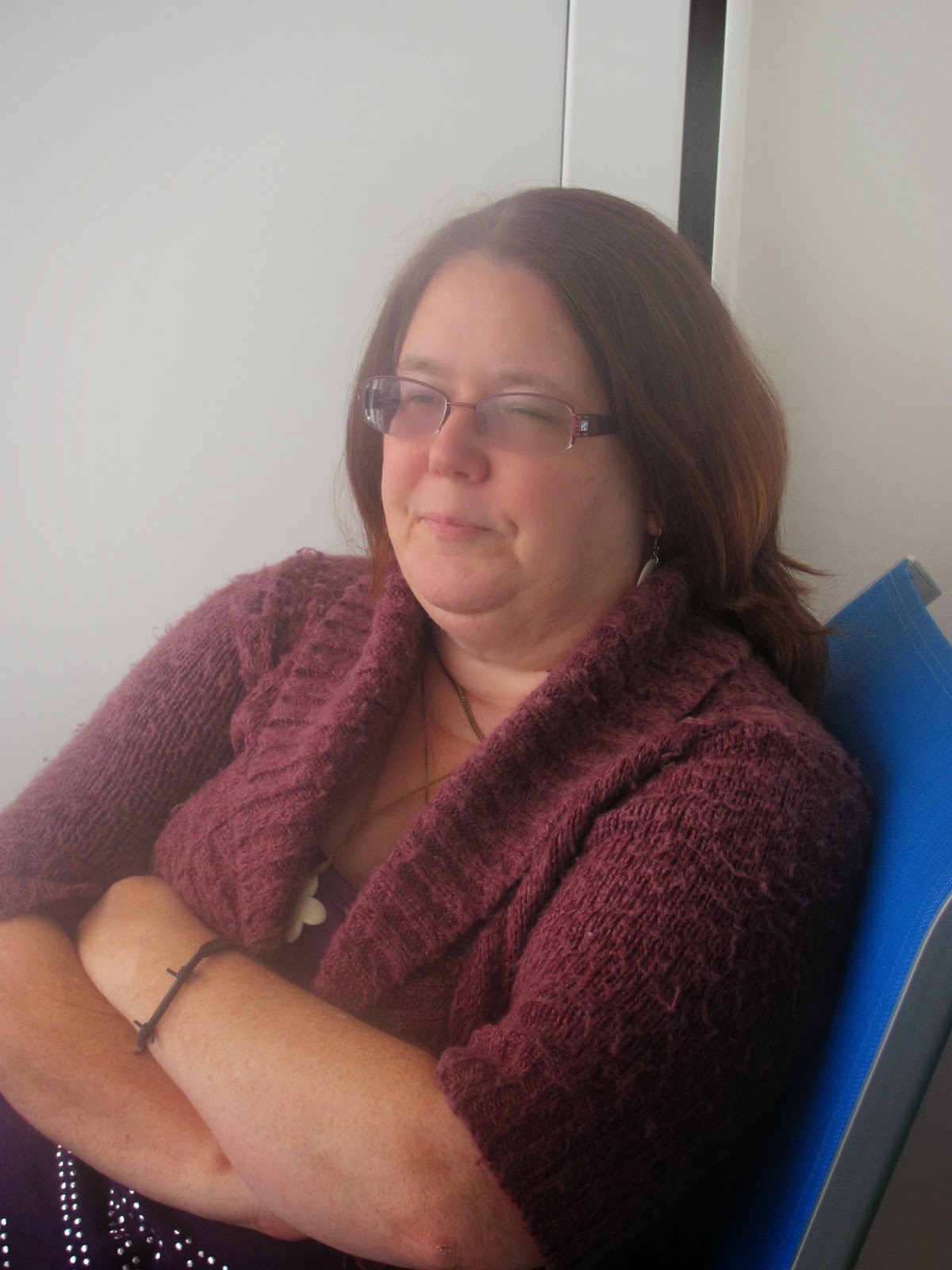 Christina Weigand’s a writer, wife, and mother of three grown children and a middle school daughter. She is also Nana to three granddaughters. She lives with her husband and youngest daughter in Pennsylvania, returning there after a short sabbatical in Washington. Currently, she’s working on fantasy novels and inspirational writing. Through her writing, she strives to share the Word of God and help people young and old to realize the love and mercy He has for everyone.

When she’s not writing, she’s active in her local Church as a lector, Bible Study, or with the church theater group, volunteering at her daughter’s school helping the children develop a love for reading and writing. Jesus fills her home with love as she shares Him through her writing.

Thank you, Christina, for visiting with us today and sharing the good news about your latest novel. I'm looking forward to learning more.