I'm delighted to host April Bostic today on her Blog Tour for her novel The Howling Heart.
The Howling Heart Book Summary:
Paige Donovan is an ambitious college graduate who aspires to reach the top of the corporate ladder. She’s climbing fast when given the promotion of a lifetime at a prestigious fashion magazine in New York City. Her bright future comes to an unexpected halt after news of her father’s death. She inherits his old cabin in the Colorado Rockies, and just when she thinks her luck couldn’t get any worse, she has a car accident in the mountains and awakens in the small, remote community of Black River.

Soon, she’s engulfed in the mystical world of Varulv---wolves descended from 13th century Scandinavia and blessed by Norse gods with the ability to appear human. Paige is desperate to return home, but never expects to fall for her rescuer, Riley Gray, a charming young werewolf from England who offers her an alternate future with his pack.  Now, she must choose between the career she’s always wanted and the love she’s always dreamed. 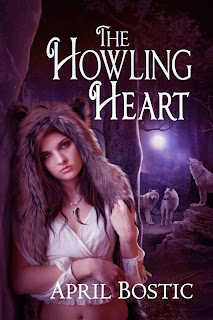 My Review:
Sometimes, incidents that happen to us when we’re children stay with us the rest of our lives. We may put them aside as we grow older and not think about them, until something triggers a memory. Then it all returns, fear or pleasant memories, depending on the remembered experience.


In Author April Bostic’s paranormal romance novel, THE HOWLING HEART, Paige has an encounter with wolves, one of them white, when she’s ten years old. She also sees a naked boy. As an adult, Paige works at Elle, a fashion magazine, and has a two-timing boyfriend. When her father passes away and leaves her their cabin in Black River, Colorado, where she met the white wolf as a child, she decides to return to the cabin for a while. The people in Black River are not what they seem. Who is Riley, a young man who looks like a god? What secrets is he keeping? And what about his twin sister, Quinn? Paige soon must make choices, choices that could mean life or death for herself and the new friends she has made at Black River.

I don’t want to give anything away about the story, but THE HOWLING HEART gives interesting details about the origins of the wolves in Black River. There’s romance, along with some steamy scenes that I skimmed through. (Not my normal kind of reading.)The language is rough at times, so I’m warning you in case you aren’t fond of bad words. I skimmed them as well, perhaps because I write for children and teens. The characters are well developed, some likable, others good villains. The ending surprised me, and I had hoped for something different. Still, it makes sense, and you may think it’s just right. The author has written a story that will keep you turning pages for sure, seldom a dull moment.

I was given an ebook copy of this book for my honest review.

Places to purchase THE HOWLING HEART


April Bostic is a New Jersey-based, Adult Romance author who enjoys unleashing her creativity and letting her imagination run wild. Her love of romance books inspired her to become not just a reader, but also a writer. In December 2008, she self-published her first novel, a contemporary romance with a supernatural twist entitled "A Rose to the Fallen".

After five years, she released her second novel, "The Howling Heart" in August 2013, a paranormal romance that delves into the mystical world of werewolves and Norse gods. To end her busiest year in publishing, April will release her fourth short story in December 2013, an 18th century paranormal romance entitled "A Dark Scandal".
Learn more about the author:

Posted by Beverly Stowe McClure at 5:30 AM