Do you remember awhile back when I reviewed Victoria Simcox's lovely fantasy novels for tweens and teens? Well, the books now have new titles. So let me refresh your memories, if you're like me and don't remember past yesterday. Books make great stocking stuffers, you know. And if you don't celebrate Christmas, a book is good entertainment anytime, especially on those cold winter days when you want a nice warm fire and a good book to read. Okay, I'll hush now. About the books. 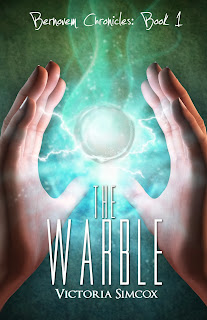 Isn't the cover mysterious and magical? Love it.
THE WARBLE (Review)

Take a girl, a present from her teacher, and a pet rat, add dwarfs and fairies, a wicked queen and a prince, a ball called the Warble and a Book of Prophecy, mix together and you have a story of adventure that will keep you wondering what will happen next.

In Author Victoria Simcox’s fantasy novel THE WARBLE, for MG/Tween readers, twelve-year-old Kristina Kingsly’s teacher gives Kristina a present that changes her life forever. A tarnished silver ball called The Warble is inside the present and Kristina and her pet rat, Raymond, soon find themselves in a place called Bernoven, where she discovers she is the chosen one and must place The Warble in its resting place, thus saving Bernoven from a curse. Along the way she meets a cast of delightful characters, among them Prince Werrien. As she and the prince struggle to reach Bernoven they face one danger after another, including the wicked Queen Sentiz and her son, who are determined to stop Kristina and Werrien. Will they reach their destination in time, lifting the curse over Bernovem? Or will they fail?


THE WARBLE is not only a fantasy story, it is also a story of friendship, family, and trust. Black and white illustrations give a visual image of the appearance of some of the characters. The author has created a fantasy world of beauty and also danger. An enjoyable read for the young and the not-so-young, as well.

And the second book in the series. 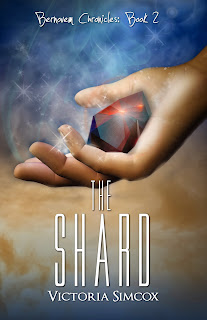 Are you curious about the shard? What it is exactly and what it does?
THE SHARD Review

Have you ever dreamed of living in a magical land of fairies, serpents, gnomes, and other fascinating characters? Even better, what if this land also has talking horses, a Seeing Crystal that shows the Wizards where whatever they want to see is, and a handsome prince that seems to think you’re pretty awesome. If you’d like to journey to such a place then come along with me to Author Victoria Simcox’s latest MG/Tween novel, THE SHARD.


My favorite characters, Kristina Kingsley and Prince Werrien, from THE WARBLE, the first book in the series, are back with more adventures, intrigue, and surprises. While attending a riding camp for girls, an accident lands Kristina in Bernoven, where she met Prince Werrien two and a half years earlier. Davina and Hester, the bullies that do their best to make Kristina’s life miserable, are also there. Kristina has no idea what happened, but she’s happy seeing old friends, along with new ones. Everyone is not friendly though. Some want to harm Kristina, and her courage is soon tested, along with her trust in Werrien.

Like Kristina, I enjoyed renewing acquaintances from the first book. Davina and Hester are just as mean to Kristina as ever. Prince Werrien is two years older, as is Kristina, and their romance is hesitant, and tender, and just right. Who wouldn’t fall for a guy, prince or commoner, that made you feel like a princess? The little girl, Jabela, stole my heart. Besides characters that come to life, Victoria Simcox, has a way of bringing the reader into the setting, making you feel as though you’re with the characters, feeling the waves toss the ship up and down, and hearing the wind whistle around you. Or visualizing the image in the mirror and shuddering. Black-and-white sketches throughout the novel provide just the right touch.


I wasn’t ready for the story to end and hope the next book in the series will soon be out. I recommend this book for fantasy lovers, adventure lovers, and everyone that enjoys a good read with a touch of danger and also romance. And you don’t have to be a tween to read it; adults will enjoy Kristina and Werrien’s story just as much.


Good News!
For free on Amazon
11/24~11/28
The Warble, Description:
Dwarfs, gnomes, fairies, talking animals, and an evil queen – all these and more can be found in The Warble, an enchanting tale of adventure and friendship.
Twelve-year-old Kristina Kingsly feels like the most unpopular girl in her school. The kids all tease her, and she never seems to fit in. But when Kristina receives an unusual Christmas gift, she suddenly finds herself transported to the land of Bernovem, home of dwarfs, gnomes, fairies, talking animals, and the evil Queen Sentiz.
In Bernovem, Kristina not only fits in, she’s honored as “the chosen one” the only one who can release the land from Queen Sentiz’s control. But it’s not as simple as it seems. To save Bernovem, she must place the gift she was given, the famous “Warble” in its final resting place. And she must travel through the deep forest, climb a treacherous mountain, and risk capture by the queen’s “zelbocks” before she reaches her destination. Guided by her new fairy friends, Clover and Looper and by Prince Werrien, a teenage boy, as well as an assortment of other characters, Kristina sets off on a perilous journey that not only tests her strength but her heart.


Sounds like a good deal to me.
Have a nice weekend.
Happy Reading!
﻿
Posted by Beverly Stowe McClure at 5:00 AM