THE CURSE GIVER, A REVIEW

Happy Monday, all. Where did the weekend go? I have a great way to start the new week: a review of Dora Machado's latest novel THE CURSE GIVER. You may remember her trilogy that we talked about awhile ago. Here is her newest.


Lusielle’s bleak but orderly life as a remedy mixer is shattered when her husband betrays her and she is sentenced to die for a crime she didn’t commit. She’s on the pyre, about to be burned, when a stranger breaks through the crowd and rescues her from the flames.


Brennus, Lord of Laonia is the last of his line. He is caught in the grip of a mysterious curse that has murdered his kin, doomed his people and embittered his life. To defeat the curse, he must hunt a birthmark and kill the woman who bears it in the foulest of ways. Lusielle bears such a mark.


Stalked by intrigue and confounded by the forbidden passion flaring between them, predator and prey must come together to defeat not only the vile curse, but also the curse giver who has already conjured their ends.
THE CURSE GIVER
My Review

Have you ever felt as though your life has been cursed, that whatever can go wrong will? Perhaps you’re right. What if there is such a thing/person/whatever that casts curses on a person or even a whole nation? A scary thought, right? It may just be possible.

Award Winning Author Dora Machado’s latest fantasy novel, THE CURSE GIVER, deals with curses, betrayal, trust, family loyalty, and love. Lusielle, on the brink of death by being burned alive because her husband turned her in as a practitioner of forbidden arts, is rescued by Lord Brennus, a highborn. He has ulterior motives for saving her life, however. Lord Bren (Brennus) has been cursed to die a horrible death. To save himself and his people he must find the woman with a special birthmark and kill her. Lusielle has that mark, and she also may be the only one who can defeat the curse giver and give Bren hope.

The author has created characters with good points and bad, like real people. They seem realistic for the time period they live in. Lusielle faces her uncertain future with bravery and cunning, surprising Bren more than once. I found myself hoping that Bren would change his mind about killing her. No, I’m not saying what happens between them. You’ll find out when you read the book. Minor characters, and there are a lot of them, add to the suspense and conflict of the story, making the reader, this reader anyway, anticipate their next actions. Thankfully, the author provides a glossary at the end to help keep track of the characters.

THE CURSE GIVER should appeal to fantasy lovers and to readers that enjoy a battle or two with swords swishing. And for those that like a good romance, you might just find it here. Dora Machado has written another winner, so pick up a copy or add one to your eReader and spend the evening, lost in another world. 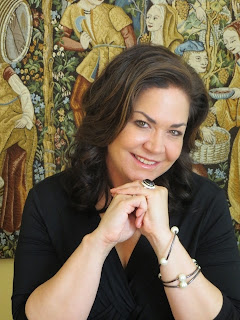 Dora Machado is the award winning author of the epic fantasy Stonewiser series and her newest novel, The Curse Giver, available from Twilight Times Books July 2013. She grew up in the Dominican Republic, where she developed a fascination for writing and a taste for Merengue. After a lifetime of straddling such compelling but different worlds, fantasy is a natural fit to her stories. She lives in Florida with her husband and three very opinionated cats.


To learn more about Dora Machado and her novels, visit her website atwww.doramachado.com or contact her at Dora@doramachado.com.