THE SHADOW OF THE UNICORN Review

Quote for the week:  The greatest pleasure of life is love.  Euripides.

Happy Monday. Today I'd like to share my review of THE SHADOW OF THE UNICORN, MG/Tween eBook by Award Winning Author Suzanne de Montigny. 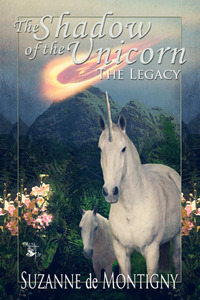 
Isn't this a gorgeous cover?﻿


THE SHADOW OF THE UNICORN (Review)


Long, long ago lived the unicorns and dinosaurs. Then came the fireball hurtling toward earth, and their world would never be the same. Strange creatures that walked on two legs appeared, bringing with them danger and death. Soon the unicorns were in a struggle to survive. Award Winning Author Suzanne de Montigny tells their story in her MG/Tween Fantasy, THE SHADOW OF THE UNICORN.
Azaria, unicorn colt, and his father, Polaris, receive a message from Saul the Great Chief asking them to go where the dinosaurs dwell. That’s a scary request because the dinosaurs are huge animals and dangerous, but they go anyway and meet Darius, a small dinosaur that tells strange tales, tales the unicorns cannot ignore, for they soon come true, and the creatures that walk on two feet (humans) arrive in the valley, bringing greed, torture, and death with them, threatening to wipe out the entire unicorn herd. I don’t want to give anything away, just let me say that Suzanne de Montigny has written a story that will have you laughing, crying, and falling in love with not only the unicorns, especially Azaria, but with the little dinosaur Darius, also, whom they’d best heed his warnings. I found myself wishing I wasn’t a human at times, for the cruelty the human Ishmael shows to the unicorns, who only want to live in peace.


THE SHADOW OF THE UNICORN would make a great addition to school libraries and classrooms to show how greed and choices a person makes, whether right or wrong, affect those who make the decisions as well as others. This is the first book in a series, so be on the lookout for book number two. I’m watching for it.


###
Available from MuseItUp Publishing
Amazon
And other places where eBooks are sold.
Happy Reading
Posted by Beverly Stowe McClure at 6:00 AM