Awhile back, Christine Amsden visited my blog and told us a little about herself and her latest book. I had the privilege of reading CASSIE SCOT:PARANORMAL DETECTIVE and would like to share my thoughts with you.

Cassie Scot is the ungifted daughter of powerful sorcerers, born between worlds but belonging to neither. At 21, all she wants is to find a place for herself, but earning a living as a private investigator in the shadow of her family’s reputation isn’t easy. When she is pulled into a paranormal investigation, and tempted by a powerful and handsome sorcerer, she will have to decide where she truly belongs. 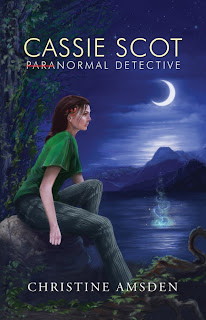 What if you were born into a family of practitioners with knowledge of the paranormal, but you were only normal, an outsider, with no magical skills of your own? What if one day your parents do the unthinkable, proving you’re right and you don’t belong in their world or any world it seems? What would you do?

In Author Christine Amsden’s latest novel, CASSIE SCOT: PARANORMAL DETECTIVE, Cassie Scot, at 21, faces a turning point in her life. The detective agency that she’s opened brings in few customers until one day she’s hired to serve a subpoena to a sorceress. Simple enough job, right? Or perhaps not, for in Cassie’s world, where magic exists, nothing is what it seems and people are seldom what/who you think they are. Cassie is soon on the trail of a murderer. She faces vampires intent on stopping her, fires that almost roast her, and questions about who to trust, when everyone around her seems to be hiding a secret.

In addition to her attempts to avoid vampires that would like to taste Cassie’s blood, there’s Braden, her boyfriend, who wants to marry her. She also finds herself attracted to Evan, the boy she went to school with, who has special powers of his own and whose family her parents despise. Even Cassie’s love life is not normal. Vivid action scenes (with great vampires as well as brothers and sisters that really care for Cassie, by the way), romance, and family relationships make for an exciting read. I recommend CASSIE SCOT: PARANORMAL DETECTIVE for mystery and fantasy lovers, and also for everyone that enjoys a good read with characters you’ll find yourself liking and hoping life turns out the way they want it, or hoping that the villains get what they deserve. I only wish the next book in the series was out because I’m ready to see what choices Cassie makes. And she has a few. Will she marry Braden? Will she decide Evan is the man for her? Will her relationship with her parents improve?

I hope we don’t have to wait too long for the answers. Very nice novel, Christine Amsden.

Find Christine Amsden on the web:

Award-winning author Christine Amsden has written stories since she was eight, always with a touch of the strange or unusual. She became a “serious” writer in 2003, after attending a boot camp with Orson Scott Card. She finished Touch of Fate shortly afterward, then penned The Immortality Virus, which won two awards. Expect many more titles by this up-and-coming author.
Happy Reading.