Today, it is my pleasure to host Author Matthew Mather.

Matthew Mather is author of the #1 best-selling Atopia Chronicles and CyberStorm novels, as well as a leading member of the world's cybersecurity community. He started out his career working at the McGill Center for Intelligent Machines, before going on to found one of the world's first tactile feedback companies, which became the world leader in its field. He also created a major award-winning brain-training video game called MindHabits. In between he's worked in a variety of start-ups,everything from computational nanotechnology to electronic health records, weather prediction systems to genomics, and even social intelligence research. He spends his time between Charlotte, NC, and Montreal, QC, hanging out with his bright and beautiful girlfriend Julie and their three dogs and a cat who thinks he's one. 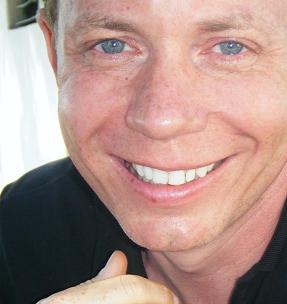 If you'd like to learn more about Matthew, you can connect to his new author Facebook page.
www.facebook.com/author.matthew.mather
He has written an article to tell us a little more about cyberspace and outer space. Very interesting.

Cyberspace and outer space don’t just sound similar—they are very similar! How? Well that’s a very good question...
Cyberspace and outer space, first and foremost, are both entirely technological domains. They are new areas of human activity that are only accessible through advanced technology—if you remove the technology, both space and cyberspace become inaccessible to humans.
Both are also seen as a global commons, domains that are shared between all nations, such as the oceans. Like the oceans, however, they are global commons that are rapidly becoming congested, and new rules are needed to be put in place to make sure that everyone can use them. In fact, space can even be seen as a part of cyberspace, because almost all modern communications satellites are now internet-based.
Congestion is a problem for both space and cyberspace. Did you know that about 90% of email is spam? This had the effect is seriously clogging up cyberspace systems, and can be dangerous since a lot of the spam contains malware and viruses.
Space is clogged up in a different way, from junk that is left behind. The total number of satellites in orbit is in the hundreds, but there are tens of thousands of small chunks of debris—from nuts and bolts that fell off spacecraft, all the way to discarded booster rockets—that clog up entire orbital regions. Even a flake of paint can be dangerous when you consider the speeds and energies involved. Orbital velocities require speeds of about 17,000 miles-per-hour relative to the surface of the earth, and if a flake of paint was orbiting in the opposite direction from a satellite, they would collide at a combined speed of 34,000 miles-per-hour—nearly seven miles per second! At that speed, a flake of paint would pack the energy of a grenade.
Another way that space and cyberspace are similar is that, by and large, they are both outside of United Nation frameworks for rules that govern how countries should behave. Instead, they are both governed by “ad hoc” sets of agreements, between individual nations or general agreements. This has important consequences, because a lack of rules tends to translate into problems no matter what the environment!
The final, and perhaps most important, way that space and cyberspace are similar is that they are both considered military “high ground.” Space became if primary important to nations around the world, back in the 1950’s, because it gave a nation, for the very first time in history, the ability to gather information and project power globally. It broke the relationship between a nation’s physical territory and its ability to influence other people, anywhere on the planet.
For exactly the same reasons, cyberspace is now overtaking outer space as the new military “high ground.” The cyber world offers unparalleled opportunities to gather information and influence events around the world, no matter what a country’s physical boundaries may be—in cyberspace, it is very hard, if not impossible, to define borders. It is no coincidence that aspiring global powers, such as China and Iran, are working hard on building their space programs at the same time as building sophisticated cyber programs.
The main difference between cyberspace and outer space is cost. Where it costs hundreds of millions of dollars to put a satellite in orbit, it costs only thousands of dollars to buy a few computers to start hacking. The main currency of the cyber world is information, and all it takes are a few very bright minds to cause damage.


CyberStorm, which chronicles the struggles of a family in New York City as they try to escape a major cyber incident. It is being released today, March 15th, and for today ONLY it is available for $0.99 (the price will go to up $3.99 after this). 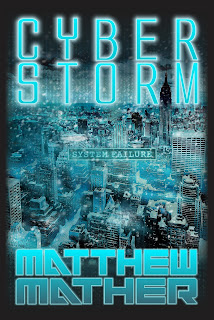 Here are my thoughts on Cyberstorm:


What if your life suddenly became a challenge for survival? What if you heard that a foreign computer code, designed to knock out the U. S. energy grid, has been embedded in U. S. power plant control systems? What if the everyday things you take for granted, like water, electricity, and food, are no longer available and you have to scrounge, steal, or get them any way you can? Not a pleasant thought, is it?

Author Matthew Mather’s latest novel, CYBERSTORM, may answer these questions for you. And you may wish you hadn’t asked. Mike Mitchell thought he had problems with his wife Lauren’s parents. That was before he heard reports that websites had been hacked and defaced, and a code designed to knock out the U. S. energy grid was embedded in power plant systems. Rumors suggest that China is responsible. People are dying too from what is suspected as bird flu. Soon Mike, Lauren, and their two-year-old son, Luke, along with their neighbors are scrounging for food, heat, and water, while trying to figure out what is going on and who is responsible. With the passing days and no answers, just starving people, Mike discovers just how far some will go to survive. Imagine killing for a handful of peanuts. Some of the scenes are rather gory, though they do show how desperation can bring out the worst in people and also the best.

I read mostly books for young adults and children because that’s what I write, but CYBERSTORM caught my attention and once I started reading the book I was glad I did. The scary thing, in my opinion, is that the events in the novel could be possible. Think how much we depend on our computer network, and how our world would change if some power gained control of the banks, businesses, and even our government. Matthew Mather’s book gives the reader a glimpse at what it might be like to face a cyber attack. CYBERSTORM is also a story of family and friendships and how things are not always what they seem. I recommend it and believe you’ll enjoy the read as much as I did.