I am delighted to host Sarah Pleydell today on her virtual book tour.

A graduate of Oxford and London Universities, Sarah Pleydell is an award-winning writer, performer and playwright who teaches English and writing at the University of Maryland. For the past twenty years, she has been a master teaching artist and arts integration specialist, working with institutions that include The Wolf Trap Institute for Early Learning Through the Arts, The Kennedy Center for the Performing Arts and the Luce Institute. In 2000, she won the American Association for Theatre Educators’ award for best book of the year with co-author Victoria Brown. Most recently she wrote the script and played the role of Isadora in Revolutionary: The Life and Times of Isadora Duncan with Word Dance Theater.

Based on her childhood in London, Cologne has been twenty years in the making. It has benefited from fellowships at the Virginia Center for the Creative Arts and input many generous and gifted writers. 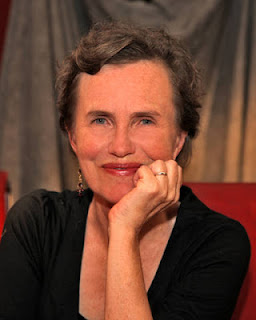 
My writing sanctuary is the Jefferson Reading Room at the Library of Congress in Washington DC, with its ornate dome and heady, erudite atmosphere. This is where I squirelled myself away to compose the lion’s share of my novel, Cologne. Cologne is set in London in nineteen-sixty; however, it refers back and forth into the fifties and sixties  as well as to pre and post war England and Germany, and in particular to the Rhineland city of Cologne. Thus there was a lot territory to cover in my research. Fortunately, I had a designated shelf in the LC and could order up books with ease, but of course I had to locate and identify them first. There was the rub!

Much of the quotidian setting for nineteen fifties Britain derived from memory, as this was where I spent my childhood. Still I had to check for accuracy and contemporaneity. There was many a British icon I had to omit because the timing wasn’t quite right: for example, the Beatles!! I was just grateful I could still include Spike Milligan and Harry Secombe, two of my favorite comedians as well as “Come Dancing”, a television program I loved as a child. One area that required more information were the motorcars of the period, seeing as Jack Whitaker, my ante-hero, was so partial to a good-looking car!  I located an excellent manual and found myself fascinated by the specifics such as the Rudge Whitworth tires on the white Alvis Jack drives to Victoria Station to pick up the new  German au pair, Renate von Hasselmann.

Flowers and butterflies are the symbolic underpinning of the novel, so I had to be scrupulous as to when a species flowered or a butterfly pupa hatched; these details were not always easy to pin down.

My research into the city of Cologne was more extensive. I have never been to Germany let alone Koln  (as it is known in German with an umlaut over the ‘o’),  and there were slim pickings in the LC, especially if I wanted to read in English. I finally secured a travel guide from the nineteen sixties that I hoped I could extrapolate from. It had all the landmarks, street names as well as references to the museums and their significant cultural artifacts. My research turned up a painting  called the Virgin of the Roses, which was serendipitous given how important roses were to the novel.  Still incorporating all these details required a lot imaginative embellishment if I were to reinvent them to the post and pre war period. I still wish I had found out more. I also read up on the kinder transport, the trains that took Jewish children to Britain just before the war. I hoped I might include a reference to them, but in the end none was apt. I wish there had been an occasion as this material was so wrenching yet such a blessing  given the alternate fate awaiting these little ones. And the fate of children is such a pervasive theme in my own novel. 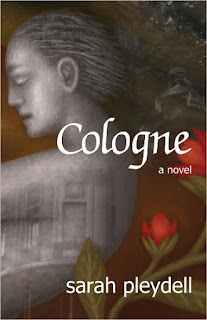 London, 1960: Renate von Hasselmann, a nineteen-year-old German au pair, arrives at Victoria Station prepared to meet her new charges, Caroline and Maggie Whitaker. Yet she is ill-prepared for their parents: the mother, Helen, knows more about Nazi Germany than Renate does, and the father, Jack, disarms Renate with his quicksilver charm.

In Sarah Pleydell's debut novel, childhood and history collide, blurring the distinctions between victim and victor, ruin and redemption. With delicate humor, Pleydell presents a portrait of a family on the cusp of great social change, while reminding us that the traumas of war revisit the children of the peace.
###
You can find the book at the following locations:
Prices/Formats: $14.95 paperback, $12.95 ebook, $6.47 ebook
ISBN: 9780984990856
Pages: 252
Release: September 18, 2012

Cologne: A Novel Blog Tour Site:
http://cologneblogtour.blogspot.com/
Tribute Books Blog Tours Facebook:
https://www.facebook.com/pages/Tribute-Books-Blog-Tours/242431245775186
Thank you for visiting with us today. Historical fiction is one of my favorite subjects. Your book sounds like one I would enjoy.
Happy Reading, Everyone