AN INTERVIEW WITH FINN FINNEGAN

Today, a most interesting young man and his mentor have agreed to answer some of my questions for their author's virtual book tour. You will meet these characters in Award Winning Author Darby Karchut's latest book, FINN FINNEGAN, scheduled for a March 12, 2013 release. So sit back, relax, and enjoy meeting two characters you will long remember. 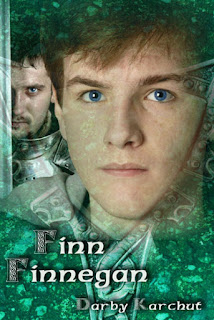 INTERVIEW WITH FINN AND GIDEON

Hi, Finn and Gideon. Thank you for taking time from your busy day to stop by and tell us a little about yourselves.

Finn: Yeah, thanks—I’ve never been to Texas before. So, is the whole state this flat?

Finn: What? I was just asking—


FINN FINNEGAN is the first book in THE ADVENTURES OF FINN MACCULLEN series. I imagine your fans would like to know a little more about you; I know I would. So, you’re on.

1. What was your first impression of each other the day you met in Gideon’s front yard?

Gideon: Mind yer tongue, boyo! Cheeky brat he was and still is.


2. What do you find the most difficult about the relationship of mentor and apprentice? The most pleasant?

Gideon: The boyo has quite a temper, so we tend to—

Gideon: —tend to butt heads like a pair of billy goats. But watching him grow in strength and skill has been an unending joy for me.

Finn: Really? Wow. I would’ve never guessed that. For me, the best part is when we’re training or hunting and I do something right and Gideon gives me this look and says gle mhaith. It’s pronounced glay moth and it means well done or very good in Gaelic. I’m learning how to speak Gaelic, too. The worse part is that I have to keep a journal and write down everything I learn each day. Pain in the butt.


3. The Amandán are your enemies. Describe them and tell us how you know when they’re nearby.

Finn: Okay, try to imagine a green, hairy half-man, half-gorilla, with breath so bad it can peel bark off a tree, and a really bad temper and you’ve got the Amandán. They can disguise themselves as objects or people, but only for a short time. Luckily, crows show up to tell us when those goblins are around.

Gideon: The Amandán, also known as the Bog-born, have been our sworn enemies for centuries. Vicious, cunning, and able to kill with a touch of their hands on our face or heads, the beasties seek to annihilate all Tuatha De Danaan. According to an ancient legend, if they destroy our people, they can then return to Ireland. Crows, the ancient symbol of war, often arrive with a warning if the beasties are near. But not always – only short-lived hunters depend entirely on those trickster birds.

4. How do you hunt for the Amandán and what kind of training do you need to be able to catch or get rid of them?

Gideon: Lately, it seems that the beasties are hunting us. The number of attacks have increased greatly since Finn arrived. We generally spend an hour or so a day doing drills, such as knife work with a dummy, a bit of target practice, and fitness training. And soon, I’ll add boxing to Finn’s training.

Finn: He didn’t mention the most important thing when hunting: stick them with the sharp end of a bronze knife or dagger – bronze is the only thing that slows them down. The Amandán can’t be killed, but they do explode into a stinky pile of ash when stabbed with a bronze weapon. They reform after a few days and then are right back hunting us again.


5. When you aren’t hunting the Amandán or training to keep yourselves and others safe, what do you enjoy doing for fun?

Finn: Fun? We don’t have fun. We train and I do chores. That’s it. Every day. It’s like being in boot camp or living with a Marine or—

Gideon: Are ye through?

Finn: I guess so.

Gideon: To answer the question: for amusement, we train and Finn does chores.


6. Describe what living in Colorado is like. What’s your favorite thing about Colorado? Your least favorite?

Gideon: This land is beautiful; more rugged than Ireland, but beguiling in its own way. Everyday, I give thanks to the Goddess for the mountains and plains and the blue sky overhead. ‘Tis an expensive place to live, however.

Finn: I like the fact we live right next to the foothills of the Rockies. But Gideon’s right about the money—we don’t have a lot. Of anything.


7. Is it difficult keeping your special powers secret from your friends and neighbors who are normal humans?

Finn: Yeah. I have to remember not to do anything around Rafe or Savannah that might make them suspicious.

Gideon: ‘Tis not difficult at all. Ye simply do not have friends who are mortal. Finn? Are ye listening to me?


8. Without giving away the plot, has your opinion about each other changed from the day you met? If so, how?

Gideon: There is more to Finnegan MacCullen than I first suspected. I dinna know who and what he was until recently. I cannot say more.

Finn: Well, I guess. I mean, Gideon’s still really strict about everything. But sometimes, he kids around and plays jokes on me. It’s like he has two sides to him—aw, I can’t explain it right.


Thanks again, gentlemen, for giving us an insight into your lives. One question. Can you speed up the release date of GIDEON’S SPEAR?


Gideon: Why, that depends on the Powers That Be. But many thanks for opening yer home to us today.

You’ve read and loved Spencer Hill Press’ YA books. Now Spencer Hill Press would like to introduce you to a book for your sons, daughters, younger siblings, friends, students and other Midgrade Readers. Finn Finnegan is an adventure story that will grip even reluctant readers with goblins, cool weapons, realistic parent/child relationships and subtle themes of responsibility, friendship and racism. Action and complex characters make it a great read for grownups, too. (Go on and try to tell me that Finn’s teacher, Gideon, doesn’t win you over.)
Darby is a 7th grade teacher at Cheyenne Mountain Junior High School in Colorado Springs (social studies). Her school is the 2012 Colorado Middle School of the Year, and was the runner up for the 2012 Middle School of the Year for the U.S. She’s available for radio, television and print interviews, as well as guest posts. Darby is also available for signings, readings and in-store events aimed at students with an interest in writing.
Spencer Hill Press is offering a prize package to ONE winner throughout the tour that includes a copy of the book, a $25 Amazon gift card and Finn Finnegan themed temp tattoos.
http://www.rafflecopter.com/rafl/share-code/MTBiNjRkMDYwN2U2MWZjNzBmNmM4YWEwNTEyODI0OjQ=/
Book notes:
Title: Finn Finnegan
Author: Darby Karchut
Publication Date: March 2013
Suggested age range: 10 & up
BISAC Category: Juvenile Fiction (Fantasy and Magic)
Pages: 200
ISBN: 978-1937053321
###
Happy Reading.