A VISIT WITH MAGGIE LYONS

Look who stopped by my blog today. Maggie Lyons. 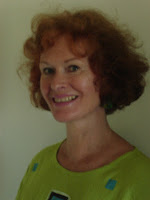 Maggie was kind enough to answer some questions for me. She is quite the interesting author. I think you'll agree.


Bev: Hi, Maggie. Welcome to my blog. Please tell us about yourself and how you became a writer.

Maggie: I’m a trapeze artist, astronaut, spy—just kidding! Well, the bit about being a spy is true. It happened a long time ago when I worked at the British embassy in Romania, which was struggling under the yoke of a communist government at that time. I found myself playing unofficial spy with the blessing of my embassy. It was silly fun, short-lived, and planets away from my middle-class upbringing in the UK. I was born in a little coal-mining town in South Wales and properly brought up in England where I did English things such as attending an all-girls grammar school, playing rounders (the English equivalent of baseball), doing two hours of homework every day, and going on soggy caravan (RV) holidays with my family. With no concern for the aural well-being of my family and neighbors, I also trained as a classical pianist, putting in daily four-hour practices.

Once I grew up—wait, that’s a fib; I’ve never actually grown up. Well, as a twenty-year-old child, I experimented with hedonism in Paris, where, among other things, I taught English to naughty French schoolgirls and failed to abide by the British embassy’s social rules in Romania—but that’s another story. My job in Bucharest was, among other challenges, to appease visiting Royal Ballet dancers. If you’ve ever attempted to herd butterflies, you’ll know what I mean.

Soon after that I gravitated to the USA because the streets here were supposed to be paved with gold. They weren’t, but I stayed anyway and finally wound up catching my breath in a tranquil fishing and farming community on Virginia’s coast.

My so-called professional life has been a regal zigzag through a motley slew of careers from orchestral management to law-firm media relations to academic editing, all of which entailed a lot of writing and editing. Although that work brought me plenty of satisfaction, it didn’t produce the kind of magic that can come from writing fiction and nonfiction for children, which I began to do about five years ago, at the start of my so-called retirement.

Bev: When you were a child, what did you want to be when you grew up?

Maggie: Everything and nothing. When I grew up in the UK in the forties, fifties, and early sixties, girls were not encouraged to think in terms of professional careers. I was told I had three options: teaching, nursing, and secretarial work, which were merely a prelude to marriage and reproduction, the sacred and only destiny of all right-minded females. An obedient child, I accepted that advice. I didn’t think I could make a successful career as a concert pianist; I didn’t want to teach—I’d had second thoughts after trying to corral feisty French schoolgirls; I wasn’t a particularly altruistic young woman and quite squeamish, so nursing was out. That left secretarial work, which I plunged into but discovered the old saying was true: never learn to type or you’ll be stuck doing it permanently. I’d hoped to rise from the secretarial ranks to the executive ranks. Didn’t happen. British management in those days was predominantly a male stronghold. That’s when I turned back to music, only I wrote about it: I became the program annotator and in-house musicologist of the National Symphony Orchestra, Washington, DC. Super job. I wallowed in it.

Bev: Twitter your newest release in 140 characters or less.

Bev: How did you come up with the idea for your latest book and were there any glitches along the way?

Maggie: For a long time I’d wanted to contribute my two cents’ worth to developing awareness of Wales, its history, culture, and landscapes in the same way that the Scotland and Ireland enjoy global recognition. I decided to make a Welsh national symbol, the red dragon—y ddraig goch, as the creature is called in Welsh—the hero of a story for children. Welsh dragons are symbols of national pride and therefore not your average hostile, snarly, eat-little-boys-for-breakfast mythical beast. In my story, Dewi and the Seeds of Doom, a young Welsh dragon named Dewi knows he must do good deeds to uphold the reputation of all Welsh dragons as symbols of national pride. He’s nosy and feisty, attributes that propel him into becoming an amateur detective. The story goes downhill from there. It’s a boisterous romp with a serious underlying message: the dangers of consuming genetically modified organisms, something which most Americans do every day without realizing what they’re eating.

Bev: You’re shipwrecked on a deserted island. What character from a book other than yours would you want to be stranded there with you? Why?

Maggie: Roald Dahl’s Matilda because she’s smart and feisty. I wish had been as self-confident and resourceful when I was young. And I bet she’d get us both off that island in no time.

Bev: What would we see if we opened your closet door?

Maggie: Literal or metaphorical closet? Either way, ghosts of the past and vestiges of the present: clothes I can no longer get into but keep in the forlorn hope of losing the necessary poundage; photos of people whose names I no longer remember; and an accordion I’m going to learn to play some day. I’m still working on turning those images into metaphorical ones.

Bev: Tell us your favorites:


Movie: Far too many to have one favorite, but of the most recently viewed movies, I’d vote for St. Ives (based on a novel by Robert Louis Stephenson) for its witty humor. I’m going to cheat and add two more, Cold Comfort Farm, again for its wit, and the old classic, The Third Man, for edge-of-seat, thought-provoking drama, an intelligent script, and one of the most famous monologues in movie history, the “Swiss Cuckoo Clock” speech.

Book: Again, too many to have one favorite, but a favorite among the most recently read is Jane Gardam’s Old Filth. Gardam is a master (mistress?) of the English language.

Bev: If you could have super powers what would you wish for?

Maggie: Superpower is dangerous, but I would like to be able to make people question things they’ve always taken for granted, examine their beliefs, search more diligently for the truth, be less gullible—and I’d love to have the power to bring a sense of humor to those who lack one.

Bev: If you could choose to live in another time, would you prefer the past or the future?

Maggie: I’m old-fashioned, so would also choose the past, even if it meant foregoing the benefits of modern conveniences and technology. A couple of hundred years ago, the air was cleaner, food contained few chemicals and was far more nutritious, and lifestyles allowed people to be vastly more sociable.

Bev: Are you working on any new books now? Tell us about them.

Maggie: Possible sequels to both Vin and the Dorky Duet and Dewi and the Seeds of Doom.

Bev: Where can your fans learn more about you?

Maggie: A very heartfelt thank-you for reading this far. Come visit me and my books.

Bev: Thank you, Maggie, for taking time out of your busy day to visit with us. Stop by anytime.

Maggie: Thank you, Beverly. It’s been a pleasure.


How's this for a neat dragon? 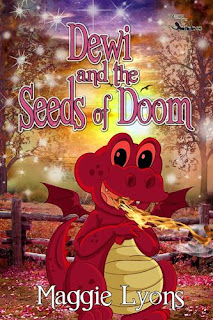