My sincere apologies to Jerome and Nicole for being so late with this post. My Internet service has been down since last Thursday. Needless to say, I'm in a pretty sour mood. It came back on awhile ago, so now I'm not quite as stressed.

It is my pleasure to host Author Jerome Charyn on his virtual book tour. 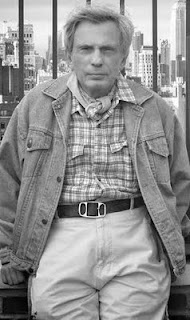 Jerome Charyn (born May 13, 1937) is an award-winning American author. With nearly 50 published works, Charyn has earned a long-standing reputation as an inventive and prolific chronicler of real and imagined American life. Michael Chabon calls him “one of the most important writers in American literature.”

New York Newsday hailed Charyn as “a contemporary American Balzac,” and the Los Angeles Times described him as “absolutely unique among American writers.”

Since 1964, he has published 30 novels, three memoirs, eight graphic novels, two books about film, short stories, plays and works of non-fiction. Two of his memoirs were named New York Times Book of the Year. Charyn has been a finalist for the PEN/Faulkner Award for Fiction. He received the Rosenthal Award from the American Academy of Arts and Letters and has been named Commander of Arts and Letters by the French Minister of Culture.

I think it might very well be that it started with Harry Potter, that young adult writers are trying to tell good stories and adults have moved into that kind of dream.

Everything begins and ends with the word, with the music of the sentence and as Tolstoy once said, “I’m always composing.”

I think that this is a kind of logical step as we move from the internet into eBooks.

Publishing is changing even as we speak. I think there now will be a more complicated dance between the eBook and the printed book, and as we’ve seen recently, successes in eBooks allow the author to move into print.

It’s not worth the money – only write if you’re absolutely in love with it.

I think so much of the source of my writing comes from my childhood, I grew up during the War - so many of the terrors and the magic of certain films have remained with me. And all of this appears in the character of Jack.

Not really, I think all writing is crime writing. And Back to Bataan is a crime novel with a very original twist.

These people were heroes to me as a child, particularly Eleanor Roosevelt, who was one of the most extraordinary women who ever lived, and of course as a child I fell in love with Gary Cooper’s face and with his very slow drawl, that seemed so exotic to me.

You’re always cannibalizing other people and writers when you start to write, so it’s natural that Jack should be a young cannibal.

As a child, I didn’t even know that the Times existed – I grew up in a neighborhood without newspapers and books, so that when I first fell upon the New York Times, I was very very greedy, and wanted to include it in Jack’s middle-class life.

Thanks for a great look at your life, Jerome.

BLOGGER PRIZE - Change your Facebook or Twitter profile picture to the cover of Back to Bataan and be entered for a $50 cash drawing. It could be anytime between June 26, 2012 and September 30, 2012, and must be up for at least a 24 hour period. In order to be eligible, please email info@tribute-books.com that your profile picture has been changed so that we can confirm it.


About the Book, BACK TO BATAAN: 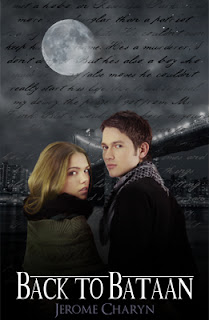 Summary
New York City, 1943. War is raging in Europe and the Pacific, while Jack Dalton is stuck attending Dutch Masters Day School. What Jack really wants is to enlist in the army, to fight...

Everything changes when Coco, Jack's "fiancee," throws him over for one of his classmates. Jack sees red and does something drastic. Then he runs away. Hiding out in a nearby park, Jack joins ranks with a group of vagrants and is soon under the sway of a man called the Leader, an ex-convict who is as articulate and charismatic as he is dangerous. The Leader turns Jack's world upside down. To put things right, Jack must prove himself a braver soldier than he ever imagined.
###


Excerpt: Mauricette told Harriet Godwin I was the pig of the class. I had treated her like garbage. Mauricette wouldn't answer my phone calls. She wouldn't read the notes I dropped inside her desk. But Arturo Fink kept reminding her who she was. “Fiancée,” he said. “Jack’s fiancée.”

I promised myself I wouldn't write anymore compositions, but how could I graduate from Dr. Franklin's class and join General MacArthur?

It felt lonely without a fiancée.

Mauricette began seeing Barnaby Rosenstock after school. They were holding hands and having chocolate malteds at the Sugar Bowl on Seventy-ninth Street. Fat Arturo was eating two ice-cream sodas. The Sugar Bowl is our hangout. It’s the official candy store of Dutch Masters Day School. I didn’t have money for ice-cream sodas. I didn’t have money for malteds. I'd buy a Hershey bar or some Chuckles once a week. I'd peek at the comic book rack and wonder what was happening to Captain Marvel or the Sub-Mariner. Marvel and the Sub-Mariner were already at war, fighting Japs. And when Mauricette was still my fiancée, I'd sit with her over a glass of water and treat her to some candy whenever I could. But now she was sucking malteds with Barnaby Rosenstock. I could hear her from my corner, next to the comic book rack.

“Oh, Jack Dalton,” she said. “He has a wild imagination. He likes to fling words around. He thinks half the school is going to marry him.”

She didn’t have to shame me in front of her friends. Arturo was laughing into his fat cheeks. Barnaby had a chocolate rainbow on his lips. I didn’t even bother with the comic books. Marvel would have to fight the Japs without me. I walked home.

Mama was at the factory. She makes parachutes. Sometimes she’d bring home a little piece of silk left over from one of the chutes. That's how I get my handkerchiefs. Not even Arturo with all his father’s money has a handkerchief of genuine silk. But handkerchiefs couldn’t make me feel good. Silk is only silk. I wondered about the American fliers who had their planes shot down and had to fall into the dark wearing some of that silk.

I couldn’t concentrate on my homework. It didn't seem important when you considered all the Japs and Germans out there. I hope General MacArthur takes me with him to Bataan. I’m not asking for a Purple Heart. I'm only asking to kill Japs. And if I have to die, I want to die near my dad...

Mama came home at seven. The streets from my window looked so dark, I thought the world had gone gray. I didn’t care. I wouldn’t mind going to school after midnight.

I couldn't tell her how I lost a fiancée, because she would have figured I was insane.

“You’re still dreaming of the Army, aren’t you? We'll have dinner and listen to the radio, my little blue boy.”

We had soup and bread and boiled potatoes and peas out of a can. It’s not Mama’s fault if meat is rationed and sugar is rationed. No one can inherit ration stamps, not even the President or Arturo’s dad.

We listened to Jack Benny. He played the violin and talked about the Japs. Mama laughed, because Jack Benny is the biggest miser in the world. He would never spend a nickel. But he told everybody to buy war bonds.

Mama told me it was time for bed.

I put on my pajamas. But I didn't feel like sleeping. I dialed Mauricette’s number and let the telephone ring. Somebody picked up the phone.

Mauricette hung up. And I wondered who was lonelier. The dead cowboys on Bataan, or young Jack Dalton.

Back to Bataan GoodReads page:
http://www.goodreads.com/book/show/13613896-back-to-bataan

Thanks again for visiting my blog today.