Today, I have the pleasure of hosting Author Jack Whitsel on his virtual book tour for his forthcoming novel SHADOWS OF KINGS. 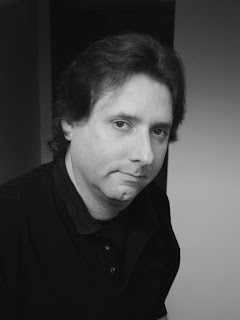 Jack Whitsel is a native Californian, but has made Oregon his home since 1982. He holds a Bachelor’s Degree of Finance from Portland State University, but studies medieval history in his spare time. His favorite genres are fantasy and historical fiction with a medieval emphasis. Shadows of Kings, the first novel of the Dragon Rising Series is the love child born of these two passions.

“I love the elements of fantasy when mixed with the gritty aspects of a medieval society,” states the author.


About SHADOWS OF KINGS

Steel and sorcery clash as the Harhn incursion sweeps through the Hugue. Mankind faces its greatest peril without the Order Knights of legend to defend them. Crusading deep in the frontier, the Order is unaware of the savage beasts threatening their homeland as the Hugue realms muster their armies for war.

Between a cunning Harhn sorcerer, and an alliance forged with the decadent Darkfey, the horde threatens to extinguish the domains of men. Only Lord Baudouin and Lady Lucia, a Dragon Maiden from the Order, stand in the enemy’s path. One must find the strength to unify the realms. The other must discover the strength within her, while coming to terms with the agendas of her Order. But only together will there be any hope to repel the onslaught, and preserve the future for a mysterious girl they do not know. 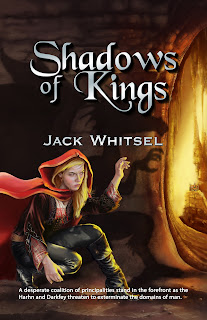 (Don't you just love the cover?)

Do you enjoy knights with flashing swords and fair maidens with a touch of sorcery? Are stories containing battle scenes aided by magic your favorite reads? If you answered yes to the above, you’ll want to read Jack Whitsel’s debut novel, SHADOWS OF KINGS, where he gives you both and much more, such as good guys and bad guys, along with a surprise now and then, as well.

Written from different point of view characters. SHADOWS OF KINGS takes the reader on a journey right along with the knights and lowborns as they fight for survival against the beasts waging war on the domains of Man. Let me warn you now, the battle scenes are bloody and very descriptive and not for the squeamish. The language too might make you blush. It did me, but then I‘m used to reading novels for children and young adults. There also are a lot of characters to keep up with, and I sometimes was confused. The author develops the major characters so well, however, that you care about them and want them to succeed in their quests. When one of them is wounded or dies in battle, you’ll mourn for them and wish they had survived. I really liked Lucia, who, even with her sorcery, was also vulnerable, letting me feel her pain and her emotions, making her more real to me. But as in all good stories, even science fiction and fantasy, good people and people we care about die. We morn them and then move on.

The addition of magic and spells makes the author’s story more than simply an adventure tale like so many others. They add mystery and fantasy along with suspense. SHADOWS OF KINGS is a nice debut novel. The good news is the book is the first in a series, so you can look forward to more from Author Jack Whitsel.