I just finished the ARC of another great debut novel. The blurb from Good Reads says:

On Roanoke Island, the legend of the 114 people who mysteriously vanished from the Lost Colony hundreds of years ago is just an outdoor drama for the tourists, a story people tell. But when the island faces the sudden disappearance of 114 people now, an unlikely pair of 17-year-olds may be the only hope of bringing them back.

Miranda, a misfit girl from the island’s most infamous family, and Phillips, an exiled teen criminal who hears the voices of the dead, must dodge everyone from federal agents to long-dead alchemists as they work to uncover the secrets of the new Lost Colony. The one thing they can’t dodge is each other.

Blackwood is a dark, witty coming of age story that combines America’s oldest mystery with a thoroughly contemporary romance.

So this story gives us a bit of history, along with adventure, romance, and mysteries. 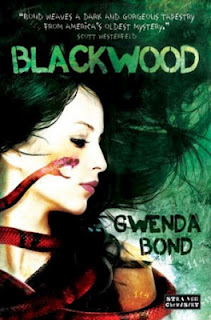 
Don't you just love the cover.


Start with a touch of history that occurred over 400 years ago, add the mystery of more than 100 people who have vanished now without a trace, mix in characters with special abilities, or curses, stir and you have a story sure to keep you searching for the answers to the weird happenings on Roanoke Island, along with the main characters.

Author Gwenda Bond’s debut novel, BLACKWOOD, takes the story of the disappearance of the settlers of Roanoke Island and weaves a story around a present day mystery, disturbingly similar to what happened in the 1500s. One hundred people are missing, Miranda Blackwood’s father one of them. Other strange things are happening, as well. Miranda sees a ghost ship. Legend says that the Blackwood name is linked to the fate of the island. What’s more, the strawberry colored snake birthmark that was on her father’s face, now is on Miranda’s.

Phillips Rawling, bad boy whose parents sent him to Jackson, a semi-reform school, unexpectedly arrives back in town. The voices in his head come back with him. Miranda and Phillips make an unlikely team, but someone has to discover the fate of her father and the other people before it’s too late. As Miranda and Phillips investigate they learn that no one is who he or she claims to be and forces they never imagined have plans for them.

Told from alternating points of view, BLACKWOOD will have you guessing at the outcome until the end. You may think you know how the story turns out. You may also be surprised. If your history about Roanoke Island is sketchy, the way mine was, you’ll likely find yourself researching the events that occurred ages ago. Ms. Bond leaves us with a cliffhanger. There will be another book; I hope it’s soon.