Today, I have the pleasure of hosting Jolene Perry on her Virtual Book Tour for her young adult novel NIGHT SKY. Jolene grew up in Wasilla, Alaska. She graduated from Southern Utah University with a degree in political science and French, which she used to teach math to middle schoolers.

After living in Washington, Utah and Las Vegas, she now resides in Alaska with her husband, and two children. Aside from writing, Jolene sews, plays the guitar, sings when forced, and spends as much time outside as possible.

She is also the author of The Next Door Boys and the upcoming Knee Deep.

After losing Sarah, the friend he’s loved, to some other guy, Jameson meets Sky. Her Native American roots, fluid movements, and need for brutal honesty become addictive fast. This is good. Jameson needs distraction – his dad leaves for another woman, his mom’s walking around like a zombie, and Sarah’s new boyfriend can’t keep his hands off of her.

As he spends time with Sky and learns about her village, her totems, and her friends with drums - she's way more than distraction. Jameson's falling for her fast.

But Sky’s need for honesty somehow doesn’t extend to her life story – and Jameson just may need more than his new girl to keep him distracted from the disaster of his senior year. 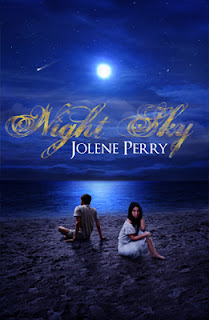 Here's what Jolene has to say about her novel:
It's funny because everyone wants to know why I chose a Native American girl, but really, in most ways, she chose me.
I didn't plan on her being native. I only knew that whatever girl Jameson met, had to be Sarah's opposite. When he was driving his dad's Porsche home, and came upon Sky, that's when I knew who she was.
Making Sky Tlingit was fairly easy for me - it's the part of Alaska my mother grew up in, and we visit there as often as we can (which is not all that often because it's an expensive place to get to) but I love it.
The Northwest Native artwork is some of my favorite, so that also played a role in where Sky was from. Sky is NOT a Tlingit name, but hopefully I explain that well enough in the book.
I loved the idea of the totems in her room, and how that part of the book came back around in the end. I also loved the drumming, which were the last two scenes written in the book (I never write in order). I spent a lot of time on the internet to make sure that I depicted the totems accurately, and I wanted Sky's village to be in a real place, but not a real village. It took me a little while playing around with maps to figure out exactly where she was, but that opened up a whole scene I wrote, when Sky and Jameson are on the phone, that I just loved.
Thanks so much for having me here today!
For more information and links of where you can buy NIGHT SKY, check below.
The book's official site is:
http://www.night-sky-book.com

Thank you, Jolene, for visiting my site today.

We love comments and questions, so ask away, friends.