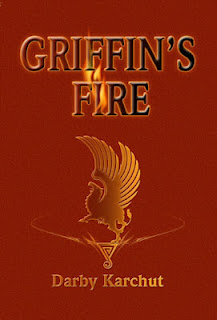 Griffin's Fire (Book Two: Fire)
Darby Karchut
Twilight Times Books
From GoodReads:
For centuries, there have been rumors about a lowly caste of supernatural beings known as the Terrae Angeli. Armed with the power to control Earth, Fire, Wind and Water, these warriors and their apprentices clandestinely serve as guardians for humans in danger.

Forced to become mortal, ex-teen angel Griffin has been banished from the Terrae Angeli. Struggling to adjust, he enrolls in the heaven-and-hell known as high school. In spite of his friends’ support, Centennial High proves to be a battleground, complete with a malicious math teacher.

And to make matters worse, his Mentor, Basil, has been ordered to take on a new apprentice, the gifted and egotistical seventeen-year-old Sergei, whose covert attacks make Griffin’s home life as bleak as a Siberian winter.

Caught between school, Sergei, and a desperate secret, Griffin is certain of one thing: the only way to fight a Cold War is with Fire.

Ah, the teen years. They’re difficult enough for a “human” teen. But what if you’re a Tiro, an angel in training as a Terrae-Angelus whose job is to save people’s lives, and through no fault of your own you’re stripped of your super powers of fire and earth. Are you then a human? Are you an angel? Or are you both?

In Griffin’s Fire (Book Two: Fire), by award winning author Darby Karchut, sixteen-year-old Griffin Raine faces these questions. Deep inside, Griffin feels that he’s supposed to be a Terrae Angelus, but his life is in turmoil. He stays in trouble at home and at school. His mentor, Basil, is frustrated with Griffin’s behavior. Even his relationship with his girlfriend, Katie, is falling apart. Then something really weird happens to Griffin, something he cannot tell Basil or share with Katie, as much as he wants to.

As if keeping a secret that Griffin wants to shout out to the world isn’t difficult enough, Basil becomes mentor to Sergei, a new Tiro. Sergei and Griffin clash from the start, which makes life in the Raine household uncomfortable for all. Griffin’s Fire is full of action, teen angst, romance, and delightful characters. Griffin is far from perfect as a boy or as an angel. He doubts himself. He wonders which world he belongs in. Katie is loyal and encouraging, the kind of girlfriend a boy needs. Their romance is sweet and just right, even with the rocky moments. As for Sergei, well, I’ll let you decide about him. Each minor character, even though in the story only for a short time, is well developed and adds to the plot. Ms. Karchut’s characters are so real you’ll either love them or hope they get what they deserve.

Griffin’s Fire would make a great addition to school classrooms and libraries. I’m going to talk to local librarians about adding the books to their libraries. The author’s note at the end of the book gives additional information about angels. You also get a sneak peek at the third book in the series: Griffin’s Storm (Book Three: Water). I loved Griffin Rising and Griffin’s Fire and anxiously await the next one. I just wish Book Three wasn’t a year away.

Posted by Beverly Stowe McClure at 9:03 AM