I recently read another debut novel that I'd like to share with you. The Pineville Heist, by Lee Chambers, makes the eighth novel I've read for my YA Debut Challenge started way last January. Only two more and I'll reach my goal of ten.

Born and raised in Canada, LEE CHAMBERS holds a post-graduate diploma in Film Production from Leeds Metropolitan University in the UK and an Advertising diploma from Sault College. He returned to Canada in 2004 after spending ten years working professionally in London and working on film and television productions for the BBC and Miramax. His short films have been screened at top festivals, such as the Cannes Film Festival, with critical acclaim coming from EMPIRE and TOTAL FILM. Along with his teaching duties at Confederation College and workshop presentations at festivals around the world, Lee has also been running the Make It Short Film Project since 2005. The community event has raised thousands of dollars for charities and exposed hundreds of people to what it’s like to work on a movie. 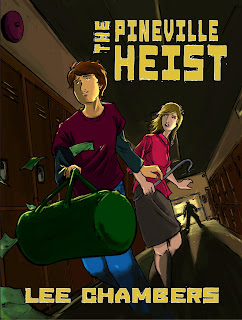 eBook courtesy of the author

Take a wealthy, seventeen-year-old kid with an attitude, a robbery, and cops with secrets, add missing bodies, a pretty teacher who may or may not be involved in the crime, stir, and you have an adventure story with twists and turns that will keep you guessing who the bad guys are until the end.

In Author Lee Chambers’ debut novel, The Pineville Heist, seventeen-year-old Aaron Stevens accidentally finds a backpack from PINEVILLE SAVINGS AND LOAN full of stolen money. When he hears Tremblay, Sheriff of Pineville, and Officer Carl discussing how someone got away with four to five million dollars, Aaron decides to return the money with the help of his friends. Well, the boys have good intentions, but they encounter major problems on the way to do their good deed. Soon Aaron, Mike, and Steve are running for their lives, pursued by a gunman determined to kill them. Aaron escapes to the school where more killing is going on, and a battle ensues between Aaron and one of the robbers. I’m not saying who because that would give away the story. However, the timid boy who was afraid to shoot a deer when he was a child, now faces a choice: kill or be killed. Will Aaron find the courage to not only protect himself but his teacher, Amanda, as well?

Readers that like a fast-paced action story will enjoy The Pineville Heist. If you’re a bit squeamish, there are dead bodies, gunfights, and some bloody scenes. This novel is better suited for older teens, 14 and up. I did have a problem with the change in point of view so often. I can see why Mr. Chambers wrote the story this way because so many characters are involved. Maybe space breaks would have warned the reader that we were in a new character’s thoughts. Nevertheless, The Pineville Heist is a good story about a young man who faces more challenges in life than most teens and how he deals with the changes in his life. Even though I’m not big on bodies lying around, I enjoyed watching Aaron tackle each situation the way only he could. I think you’ll enjoy the read as well. You might want to leave the lights on if you read the novel at night.

You can learn more about Lee Chambers and his work at:


Posted by Beverly Stowe McClure at 7:00 AM