Since I read mostly books for children and teens, Jerome Charyn is a new author for me. He's touring his book Johnny One-Eye, and I'm happy to be a part of it. Let me introduce Author Charyn to you. 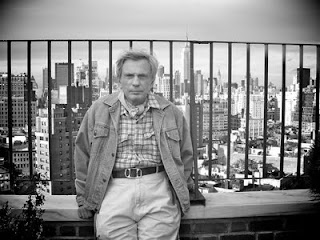 Jerome Charyn (born May 13, 1937) is an award-winning American author. With nearly 50 published works, Charyn has earned a long-standing reputation as an inventive and prolific chronicler of real and imagined American life. Michael Chabon calls him “one of the most important writers in American literature.”

New York Newsday hailed Charyn as “a contemporary American Balzac,” and the Los Angeles Times described him as “absolutely unique among American writers.”

Since the 1964 release of Charyn’s first novel, Once Upon a Droshky, he has published 30 novels, three memoirs, eight graphic novels, two books about film, short stories, plays and works of non-fiction. Two of his memoirs were named New York Times Book of the Year. Charyn has been a finalist for the PEN/Faulkner Award for Fiction. He received the Rosenthal Award from the American Academy of Arts and Letters and has been named Commander of Arts and Letters by the French Minister of Culture.

Charyn was Distinguished Professor of Film Studies at the American University of Paris until he left teaching in 2009.

In addition to his writing and teaching, Charyn is a tournament table tennis player, once ranked in the top 10 percent of players in France. Noted novelist Don DeLillo called Charyn’s book on table tennis, Sizzling Chops & Devilish Spins, "The Sun Also Rises of ping-pong."

His tour schedule can be found on the Johnny One-Eye blog.

JOHNNY ONE-EYE, A TALE OF THE AMERICAN REVOLUTION
by Jerome Charyn
Review 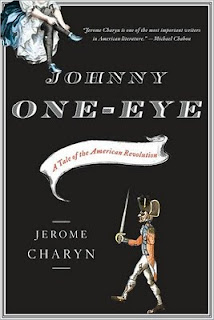 War turns lives and countries upside down. And if you’re playing both sides, you‘ll likely spend a lot of time in cellars or prison or the hold of a ship. You might even be tarred and feathered. Just ask Johnny One-Eye.

In JOHNNY ONE-EYE, A TALE OF THE AMERICAN REVOLUTION, author Jerome Charyn follows the eight years of the American Revolution in New York. Johnny Stocking, AKA Johnny One-Eye because he lost an eye in Canada with Benedict Arnold, age 17 at the beginning, is a fictional character placed in the midst of real events and participants in the war. Johnny, an orphan, suspects that Gertrude, the mistress of The Holy Ground, a bordello, and George Washington, commander in chief of the Continental Army, are his parents. So many different characters were involved in the story that parts of the book confused me and I had to refer to the list of characters at the front to see who was who. The listings were a great help.

One of my favorite parts to the novel is the vivid picture the author paints of what George Washington was like, from his physical appearance to his concern for his men and for Gert, as well as his feelings for Johnny. We see Washington, I think, as human, and not simply the great general we read about in most historical books. As for Johnny, his fears, his emotions, and what he goes through to survive show a gruesome side to the war. To me, he’s a brave young man that sometimes makes bad decisions and has to pay the consequences, much like teens of today.


The American Revolution is one of my favorite periods in history. I’ve read many books about the war, but none quite like this one. We see a different side to the war, rather than just the battles between two armies. The characters, both real and from the author’s imagination, bring the Revolution to life, with true events and imaginary ones. The language and some of the scenes are too rough for my liking and I skimmed over them. Other readers may not be offended by the openness of what goes on at The Holy Ground, but I’m not crazy about it. If you love the Revolutionary time period of our nation, you might find this novel enjoyable. I think it does show the effect war has on not only the soldiers but their wives, children, and friends. War is ugly.

But the character I enjoyed the most was the fictional Johnny One-Eye. I’m always for the underdog. I like to see someone whose life is about as bad as it can get fight back for his
beliefs. Even though he may not always win, at least he tries.

One lucky reader will win a hardcover copy of Johnny One-Eye ($25.95 value) , U. S addresses only. All you have to do is leave a comment with your email address so I can contact you.

Buy links:
Amazon
Barnes & Noble
eBook buy links:
Kindle
Nook
Google
iPad
You can contact the author to learn more about the author and his work at the following sites:

Thank you for stopping by and don't forget to leave a comment for a chance to win a hard copy of the book.