Griffin Rising by Darby Karchut is one of the novels I've read for the 2011 YA Debut Author Challenge started back in January. Thank you, Darby, for writing such a wonderful story. Here are my thoughts: 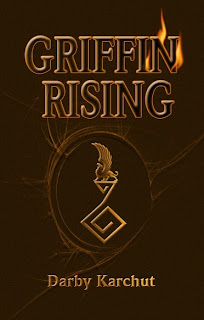 
Would you like to have a guardian angel watching over you? If so, then curl up in your favorite reading spot and enter the world of Griffin, a Tiro or Terrae Angelus in training, and his Mentor Basil, Terrae Angelus. “Terrae Angeli exist only to serve as guardians to man.” They are earthbound. They have free will, like man. Their powers align to the Four Elements: Wind and Water, Earth and Fire. Like man, they also can be destroyed.

Griffin begins his training to become a Terrae Angelus under Nicopolis, a cruel Mentor who beats Griffin and finds fault with everything he does. When Griffin is thirteen earth years of age, Nicopolis accuses him of trying to ruin his status by failing all his lessons. If Nicopolis decides to end Griffin’s apprenticeship, Griffin will be kicked out of training and become a mortal. Luckily Flight Command finds another Mentor for Griffin, which is the best thing that could have happened to him. Under Basil, his new Mentor, Griffin experiences kindness and a gentle, though stern, teacher, one who doesn’t give praise often, but is serious when he does.

Author Darby Karchut’s debut novel has a little of everything: humor, suspense, and danger. Toss in young love when new neighbors with a pretty daughter Griffin’s age move into the house across the street and Ms. Karchut has written a book that will please most everyone, male and female, young and old. How can romance survive when the girl who captures Griffin’s heart doesn’t believe in guardian angels and says they remind her of “creepy stalkers?” Will Griffin and Katie be able to overcome their differences? Will Griffin win his Proelium, the battle where he becomes a Terrae Angelus? You’ll be turning pages to find the answers.

Through journal entries from Griffin, Basil, and Katie we witness their inner thoughts, adding a neat touch to the story. I wasn’t ready for this story to end. I’m happy to report that we’ll get to read more about Griffin in future books. Having a boy for the main character will appeal to male readers, but there’s plenty here for female readers too. This is a splendid first novel. I’m looking forward to reading more from this talented author.

Happy reading.
Posted by Beverly Stowe McClure at 7:30 AM