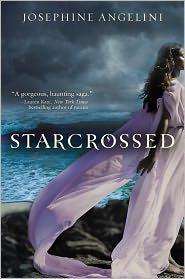 STARCROSSED by Josephine Angelini is the 7th debut book I've read for The Story Siren's challenge. I may make it to ten after all.

Sometimes our dreams are so real that we have trouble separating the truth from our imaginations. And if we awaken with dirty feet, scratches and cuts, and remember a barren wasteland, then the dreams turn into a nightmare. Add a necklace that appears to be something different to each person that looks at it, a girl whose strength makes her almost invincible, and a bad guy with a mission, and you’ll find yourself reading just one more page, then another, and another unable to put the book down until you see what happens next.

Author Josephine Angelini’s debut novel, STARCROSSED, introduces us to sixteen-year-old Helen Hamilton, who lives in Nantucket with her father, Jerry. She knows nothing about her mother who ditched them when Helen was a baby. Helen has nightmares. But her dreams are the least of her problems. She “sees” things, like a white figure that vanishes and three sobbing women. At school, the mere sight of Lucas Delos and the other members of his family, new on the island, bring forth such hatred that she attacks Lucas. She doesn’t even know him, so why does she hate him? Also, she can fly. Helen soon discovers she has another power, too, that could be deadly unless she learns to control it. (No, I’m not telling. You’ll have to read the book to find out.) As Helen attempts to put together the puzzle that is her life, Lucas tells her his story, which is tied up with hers in ways she could never have imagined. Before long, Helen and Lucas are in love, a love that is doomed from the beginning.

The characters in STARCROSSED are well-developed. Like people in real life, they’re not perfect, which makes the reader care what happens to them. I could feel Helen’s pain as she learned the truth not only about herself but about her mother and father, as well. The plot moves along with plenty of action. Myths, legends, love, and twists and turns make STARCROSSED a novel that you’ll remember long after you’ve read the last words. I’m looking forward to the sequel.