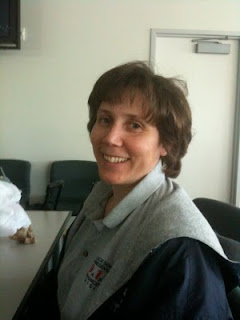 It is my pleasure to interview Stephanie Burkhart, multi-published author of books for children and adults. A member of Generation X, Stephanie was born in Manchester, New Hampshire. After graduating from Central High, she joined the U.S. Army. She spent 11 years in the military, 7 stationed in Germany. While in the military she earned her B.S. in Political Science from California Baptist University in Riverside, CA in 1995. She left the Army in 1997 and settled in California. She now works for LAPD as a 911 Dispatcher. Stephanie has been married for over 18 years. She has two boys, Andrew, 8, and Joseph, 3. Hello, Stephanie, thanks for answering my questions.

BEVERLY: Your current book, The Giving Meadow, is a picture book. Why did you decide to write for young readers?


STEPH: It seemed natural. I've been helping to teach 3 year-olds for my church's preschool program since 2005. My fellow teachers, Maureen, Shirley, and Mary are dynamos and the children not only inspire us, but keep us young.

BEVERLY: What was your favorite book as a child?

BEVERLY: If you weren't an author, what would you be?


STEPH: I like helping people so my job as a 911dispatcher is perfect.

BEVERLY: What would we find if we looked in your closet?


STEPH: Oh, Beverly, you're a brave one! Clothes, suitcases, shoes, and a collage of pictures form when I was in the army.

BEVERLY: What is your favorite movie? Music? TV Show?

STEPH: The sound of music. I traveled to Salzburg, Austria in 1988 and the time I spent in Austria gave the movie another dimension for me.

Music? Old stuff; Beatles and Duran Duran. They were there for me when I was a teenager. New stuff: Favorites include Coldplay, Linkin Park, Lady GaGa, and Pink.

TV Show? I'm enjoying Battlestar Galactica, Caprica, The Tudors, Rome on DVD. I like watching Dancing with the Stars. I don't watch much real time TV because the kids have Nick on.

BEVERLY: If you could live in any time period when would you choose? Why?


STEPH: The late 1800's, early 1900's in Romanov Russia – St. Petersburg. I can't explain the pull or the feeling I have for that time, just that resonates deeply with me.

BEVERLY: If you had no electricity, cell phone, computer, or batteries, how would you spend the day?


STEPH: By taking a ride on a steam train!

BEVERLY: What is in your future? Do you have more books coming out?

STEPH: I have a TW/YA book called "The First Flag of New Hampshire" due to be released with 4RV Publishing in 2011. We just went through edits. On the Romance side of the house, I have a short story, "Shadows and Light" to be released in the Borealis Anthology in DEC 2010. It's a sci-fi/futuristic story.

BEVERLY: Do you have anything you'd like to add or other things you'd like us to know?


STEPH: How about some fast facts? I was married in Denmark, 1991. I love California wine counties Napa and Sonoma. My first trip to Disney was EuroDisney just outside of Paris in 1992.

Thanks for having me today, Beverly.

GOODIE TIME: Leave a post here on the blog. I'll pick two lucky winners to receive an autographed postcard of the cover. One lucky winner will receive a Giving Meadow mousepad. Winners will be drawn out of a hat, and I'll return on 17 AUG to announce them.


STEPHANIE ON THE WEB:

STEPHEN ON THE WEB:


"Romance Under the Moonlight." 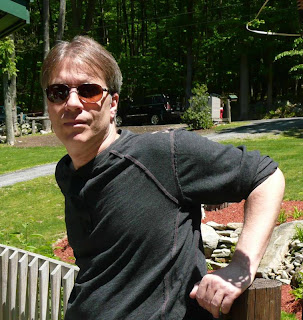 
Now I'd like to tell you about Stepahie's and Stephen's lovely picture book. 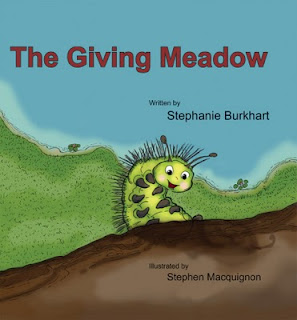 Stephanie Burkhart’s picture book The Giving Meadow starts with an egg. The egg hatches into a caterpillar, a very hungry caterpillar. So the hungry little caterpillar with a sweet smile and big eyes does what a hungry caterpillar does. He sets out to find food. From the frog to the ladybug, from the bee to the snake, every animal the caterpillar meets shares its water or food with the caterpillar. Each day, the caterpillar grows bigger and bigger. He’s also hungrier and hungrier. Will his tummy ever be full?
This is a lovely story of friendship, sharing, and thinking of others. It also shows young readers the stages of metamorphosis of the butterfly. With the caterpillar’s happy smile, the bee’s long lashes, the blue-eyed snake with the forked tongue, and all the other little critters that help the caterpillar find food, Stephen Macquignon’s colorful illustrations capture the spirit of the story, the giving and sharing of the animals that live in the meadow.
The Giving Meadow is a nice book to add to a child’s library. Early childhood and kindergarten teachers could use this book in their classes as a fun read to teach children about the small creatures in their world. I recommend this book for little ones ages 4-8, for animal lovers, even the crawly kind, and for everyone who enjoys nature and a gentle read at bedtime. Don’t be surprised, Mom and Dad, if you find yourself in the backyard with your children, searching for caterpillars so you can watch them grow and change into a lovely butterfly.