You may remember awhile back Kim did a post here. Since then, I've interviewed her and she's answered my many questions. I thought you'd enjoy learning more about this talented author.
Kimberly was born in Massachusetts, but raised in Florida. She graduated from Florida State University and then spent eight years in the classroom—primarily as an English, social studies, and drama teacher. Now a homeschooling mom living in Minnesota, she relies on those classroom experiences to create realistic fiction for her readers. 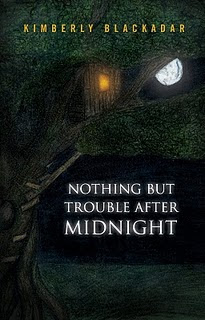 Bev: Your debut novel, Nothing but Trouble after Midnight, deals with some tough situations that teens face in their lives. How did you decide to write this particular story?

Kim: Many years ago, I wrote a novel sketch entitled “Secrets,” and like anyone who keeps a secret for a long time, you eventually have to let it out. So I revealed Chloe’s horrible secret in the pages of Nothing but Trouble after Midnight.

Bev: What is your writing process? Do you outline or just let the characters lead you?

Kim: Hmm, my writing process? Well, my first book was trial and error, with two abandoned manuscripts being the biggest errors, but with the sequel, I wrote an outline and have followed it closely.
Bev: What was your favorite book as a child?


Kim: I had many favorites as a child, but my favorite read (as a young teen) was Love Story by Erich Segal. I found my mother’s copy and devoured it, and I’m sure the novel influenced me greatly as a writer.

Bev: What was your favorite subject in school? Which did you dislike and why?

Kim: English was my favorite subject, so it was no surprise when I became an English teacher. Math was my least favorite, I guess, but I always joked that it would have been better to teach when I was leaving the campus with an enormous stack of essays to grade.
Bev: If a movie was being made of your book, who would you choose for the main characters?

Kim: When I was writing NBTAM, I went to see Mama Mia, and when Amanda Seyfried (Sophie) appeared on the screen, she reminded me of Chloe Preston. But as far as Rob Callahan, I have yet to find a guy who lives up to my imagination.

Bev: If you were stranded on an island with no computer, no cell phone, and no electricity how would you spend your time?

Kim: I would spend my time building a raft.

Bev: Tell us about your favorite:

Music: Oh, that is impossible to list. I love music—almost as much as books. I’m a huge fan of indie pop and 80’s alternative, and I like pretty much anything but hard-core rap.

TV Show: Well, that’s easy, since I cannot remember the last show I watched. I do, however, like movies.

Book: My seven-year-old son and I are reading Chronicles of Narnia this summer: He listens to the books on tape, and I am reading the massive seven-books-in-one paperback. I know I will always treasure our book talks.

Bev: If you could live in any time period when would it be?

Kim: I cannot leave the present: I am too dependent on technology.
Bev: Name a country you’d really like to visit and why.

Kim: The United States. I want my children to learn—and appreciate—as much as possible about our great nation before we go abroad.

Bev: Nothing But Trouble After Midnight is the first book in a series. Tell us about future books.

Kim: Entitled the Seven C’s series, each of the seven books features a different female protagonist and focuses on a current topic of adolescence. All the books are set in the fictitious town of Riverside, a supposed suburb of Orlando, and offer a realistic portrayal of teenage life. The first book, Nothing but Trouble after Midnight, spotlights Chloe Preston and introduces the other six girls in the series. And the second book is well underway…

Bev: How can your fans learn more about you?

Blog: http://www.kimberlyblackadar.wordpress.com/
Bev: Is there anything else you’d like to add to encourage writers and those just starting out?

Kim: There are many things I wanted to accomplish in my life, but I probably won’t get to all of them. Writing a book became a top priority for me, and therefore, I finished it. I had no expectations of it—except that I wanted see it in print someday. Any success beyond that continues to amaze me. So my advice is: Make writing a high priority, but set realistic expectations. That way you will accomplish your goal and be pleased with the outcome.
Bev: Thank you for visiting with us today, Kim. I’m looking forward to your next novel and meeting up with Rob and Chloe and their friends again.
Posted by Beverly Stowe McClure at 8:09 AM